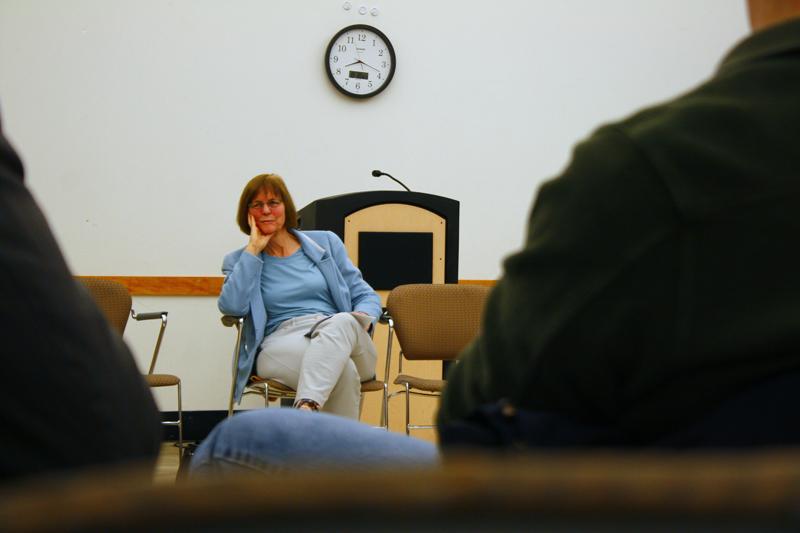 “I like talking with people instead of at them,” the mayor told The Daily after the event.

About two dozen people came to the meeting at the Levy Senior Center, 300 Dodge Ave.

She talked about her position on the proposed expansion of the so-called “Safe School Zone” around ETHS, 1600 Dodge Ave. Instead of extending the boundaries, she suggested adding more cameras and lights to surrounding area.

“We have $60,000 in our budget for lights and cameras that this school asked for,” the mayor said. “Some kids were concerned about their safety going to and from school, so I want to run cameras … and have kids feel safe going north to south, east to west.”

Tisdahl also addressed recent decisions by City Council. She defended new restrictions on electronic cigarettes that aldermen approved Monday night, saying she does not believe the measures will hurt businesses. Responding to an attendee’s concern about public transit in the city, Tisdahl said repairing the Purple Line remains a priority for the council.

With the assistance of city manager Wally Bobkiewicz, Tisdahl also discussed what one attendee called the “food desert that is south Evanston.” The mayor said that the city’s economic development team has devoted more staffers to the issue. She credited the team with bringing new businesses to Evanston, including Trader Joe’s, which opened this summer at 1211 Chicago Ave.

Bobkiewicz also helped Tisdahl elaborate on issues such as residents’ access to Northwestern’s new parking lots, which are still under construction. Evanston resident Madelyn Ducre raised these questions, explaining that she has grandchildren attending NU for whom access to parking is important. Ducre asked what the city could do to work with NU on the issue.

“We can negotiate anything, whether successful or not — I don’t know,” the mayor replied.

After the event, the mayor told The Daily she was pleased with how it went. Usually more people attend town hall meetings, the mayor said, attributing Wednesday’s low turnout to the rain and the lack of a “hot issue.”

She also detailed a topic that was not brought up during the meeting: town-gown relations.

“I think Northwestern is a wonderful university and an asset for Evanston, but I think we can have a better relationship,” the mayor said. “I think what’s exciting is that we have a long way to go, and we can improve, which will be good for the city and the university.”

Evanston resident David Guran was also satisfied with the meeting. He was vocal throughout it, raising questions about various topics, including recycling fees.

“I do appreciate when the public can give their opinions and discuss it with public officials,” Guran said after the meeting.