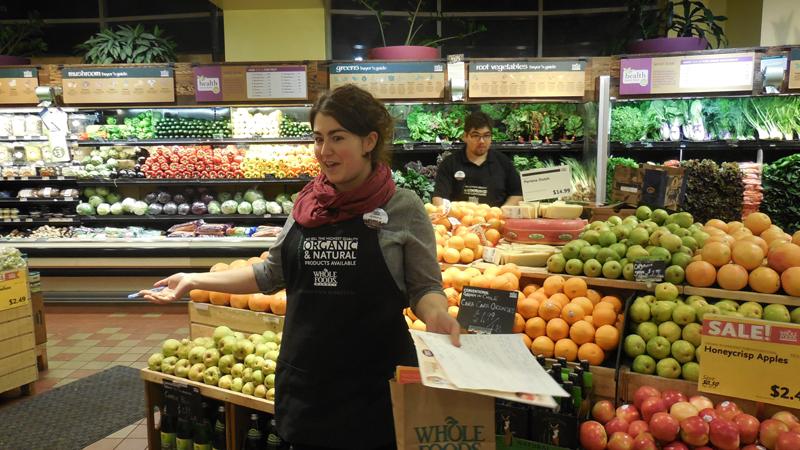 Jessica Hochman tells Evanston residents "to eat the rainbow" Tuesday evening. It was one of many tips and recipes Hochman shared during a tour of Whole Foods, 1640 Chicago Ave.

Asked Tuesday evening why Whole Foods would hold a free tour for its customers, Jessica Hochman had a simple answer: “To empower people and eat healthy.”

Evanston residents and Whole Foods shoppers came out to attend the free tour and Q-and-A session with Hochman, a team member at the grocery store, 1640 Chicago Ave.

Jessyca Dudley, the city’s public health educator, hosted the event with Hochman. She explained the scientific side of eating healthy.

“It’s hard for a health department to be fun in a community,” Dudley said. “We’re interested in individuals, not just in outbreaks.”

The visitors were provided with healthy eating recipes to cook at home and samples of Honeycrisp apples, organic salads and pizzas with a more nutritious crust.

Hochman led participants through racks of different-colored fruit in the produce department, where she encouraged them “to eat the rainbow.”

She touted the benefits of cooking without oil, drawing on her experience from a 28-day healthy eating challenge last summer.

“I cook with a lot less oil because I learned ways to cook without it,” she said.

Hochman took the residents through the bulk aisle, where she told them how to make their own trail mix.

She toured the entire store, including the meat department, where she emphasized portion control. She was a vegetarian for six years and changed her eating habits to include meat, out of “culinary curiosity.”

Dudley also urged the customers to cut down on daily sugar intake, stressing “there are so many ways to get the sweet without the sugar.” Hochman suggested adding fruit juice to non-sweetened black iced tea or coconut water as healthy alternatives.

After more than 15 years at the Chicago Avenue location, Whole Foods has also started doing its own juicing. It also offers cooking classes in a room above the store.

As she finished a slice of pepper-and-olive pizza provided by Whole Foods, Delores Walker said she came to the tour to learn more about nutrition and health.

“I know a lot, but a little more wouldn’t hurt,” said Walker, who shops at the store once or twice a week.

Hochman said she wanted to bring Dudley in to give a better outlook to people about healthy eating.

“They can come to us if they have questions,” Hochman said. “Healthy eating can be scary if approached the wrong way.”