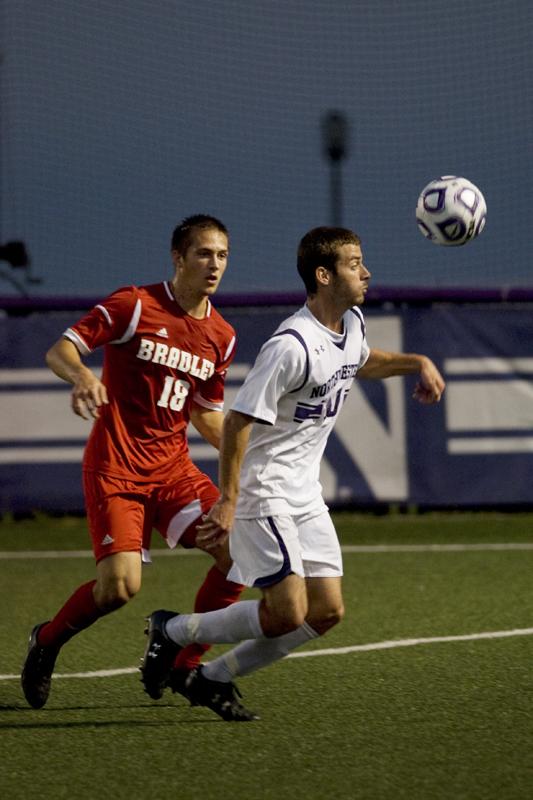 Sophomore forward Joey Calistri finally broke through his five-game cold streak at Penn State on Sunday, scoring NU’s only goal in its 2-1 double-overtime defeat. Calistri leads the Big Ten with 11 goals this season and needs to find the net again if the Wildcats hope to end their win drought.

No. 25 Northwestern returns home in search of a win against Loyola to set it on the right path.

After suffering another overtime loss this weekend, the Wildcats (8-4-3, 1-2-1 Big Ten) need a win to right the course for the few games left in the regular season. Wednesday night’s showdown against the Ramblers (4-9-2) will be pivotal, as NU has played four games without a win. Its last win came against Northern Illinois in early October.

This three-game home stand will be the last of the season. The Cats are 3-3-1 on their turf and 7-2-2 against non-conference opponents. NU hopes to go above .500 at Lakeside Field and seeks a welcomed home victory after a brutal road trip.

“Well, Sunday was a tough day,” coach Tim Lenahan said. “It’s great to be home again. The season, no matter what we do, will be determined by what we do in the next three games.”

In a way, the Cats won’t be the only ones home again Wednesday night. Loyola’s coach, Neil Jones, spent his last three seasons as associate head coach for NU. In December of 2012, he joined the Ramblers in their pursuit of success. Most recently, Jones and his Loyola squad beat Southern Illinois Edwardsville 1-0 in overtime. Momentum looks to be swinging in their favor, but NU has learned from its previous competitions.

“It’s definitely given us a wake up call in these past few games,” freshman midfielder Jeffrey Hopson said. “In how to improve and going forward, we really need to focus.”

Another talking point is the amount of overtime games the Cats have played this season. They have had seven thus far, the last four consecutive matchups falling into this category. Fatigue becomes a considerable concern at this point, but the Cats have retained a relatively clean bill of health with most starters.

Last year, NU took care of business and beat Loyola Chicago 2-0. The home field poses a potential point of advantage, but games have had a tendency of grinding to the very end this season.

Sophomore goalkeeper Zak Allen is a Chicago native and hasn’t had a problem adjusting to playing between the posts thanks to his teammates.

“It’s been a little tough getting into the habit, but I think I’ve been playing well and with confidence,” Allen said. “I think the team’s been helping me out. Penn State was a tough game and it was a tough plane ride home, but I think we’ve talked it over. We’re starting to have confidence coming back into our last three home games. We’re looking forward to it.”

Lenahan finds both teams’ similarities an interesting situation in terms of game planning, with Jones at the helm for the opposition.

“Loyola’s going to look very similar to us,” Lenahan said. “You’re going to see a lot of things that are similar, and a lot of terminology is going to be the same. Obviously, he’s going to put his own stamp on it. When the whistle blows, we need to come out on top. It’s go time as I like to say. Everything these next three games is about us playing well and coming out on the right side of the scoreboard.”