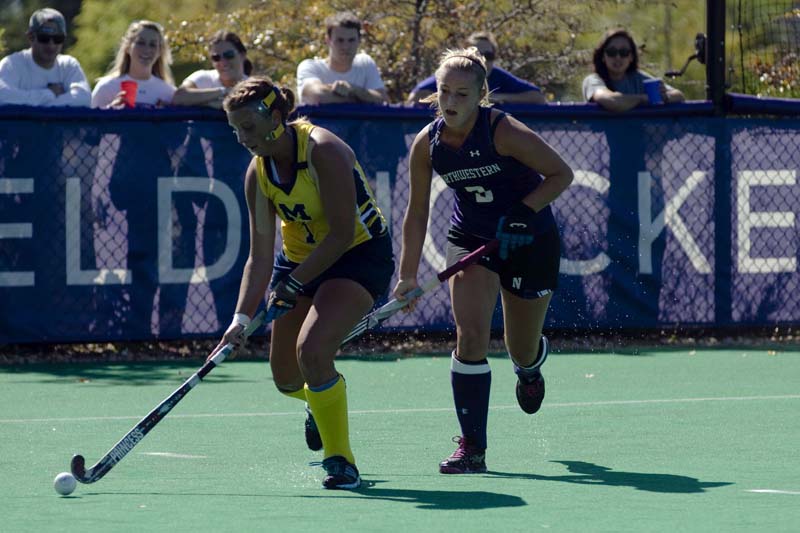 Midfielder Dominique Masters scored both goals in NU’s shutout win over Central Michigan on Sunday. The freshman from the United Kingdom has been a precocious sensation, standing second on the team in goals and points as the season winds down.

Northwestern wrapped up a month-long road trip and tied a nice bow on it, winning both games over the weekend.

The No. 13 Wildcats (14-4, 4-1 Big Ten) emerged victorious against both Michigan State (8-9, 3-2) and Central Michigan (6-10), only allowing in total one goal but netting four for themselves. The first game of the weekend against Michigan State proved to be the tougher of the two contests, with NU winning 2-1.

“It was one of very few games where the other team had more shots and (penalty) corners than us,” coach Tracey Fuchs said. “We played really well. Maddy (Carpenter) saw the most action and made critical saves at critical times.”

Carpenter was particularly excited for the Spartan challenge. She understood that Michigan State is an aggressive team, despite its overall record. They like to shoot — a lot.

“We were neck and neck the whole time,” the junior goalkeeper said. “It was a lot of fun. They had a lot of good shots, and (Michigan State forward) Abby Barker really tested me and our defense.”

The Spartans outshot the Cats 15-10. The Michigan State offense put seven shots on goal, but Carpenter stopped all but one. Regardless of the tempo of the game, NU kept its energy up.

“There was no lull,” Carpenter said. “We knew we were going to win. We took it.”

On the offensive side, Lisa McCarthy and Isabel Flens posted goals for the Cats. McCarthy’s score came in the first half, and Flens dashed the Spartans’ hopes with just above six minutes left in regulation.

In game two of the weekend, the Cats blanked Central Michigan 2-0. The name of the day was Dominique Masters, a freshman midfielder hailing from the United Kingdom. Masters claimed both goals on corners for the Cats.

“It was really nice to get the two corners,” Masters said. “We had to really make sure we are on our top form. It’s great that everyone knows what they’re doing on the field.”

Fuchs promised extra corner practice coming into the weekend, and that practice proved helpful on offense and defense. Throughout the game, the Chippewas forced the Cats to defend against five corners — four in the second frame.

“Corner practice definitely helped,” Fuchs said. “Dom got both of her goals off corners.”

Senior midfielder Julia Retzky came back to the team this week. Much to the chagrin of the Chippewas, the return of Retzky helped NU as she was credited with an assist on both goals.

As the curtain closes on the regular season, the Cats trail conference rival Penn State for the Big Ten Championship. The Nittany Lions have already gotten their paws on part of the title. If Penn State falls to Michigan on Friday and NU takes down the conference-winless Ohio State, then the two will tie for the title.

Finishing off the Spartans helps the Cats as the only conference contender for the title against the Nittany Lions. Taking care of the Chippewas just pads an already astounding record of 14-4.

“Overall, I couldn’t be happier about the weekend,” Fuchs said.