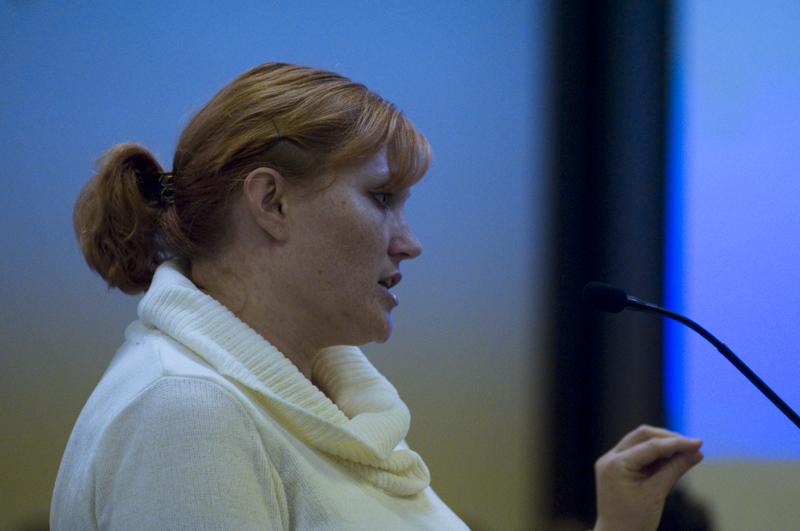 April Bailey, tobacco program manager at the American Lung Association, speaks at the city council meeting Monday evening in support of e-cigarette regulation. The council voted 8-1 in favor of the ordinance.

Evanston aldermen Monday night voted to prohibit electronic cigarette use in public spaces, despite a personal plea from one of their own against the restriction.

After weeks of heated deliberation, City Council approved an amendment to Evanston’s tobacco ordinance, adding electronic cigarettes, or e-cigarettes, to the list of products outlawed from all smoke-free areas. “Vaping,” the term used for smoking an e-cigarette, will now be illegal in all Evanston businesses, restaurants and other public spaces.

The city has acknowledged few such studies have been done on the issue, though e-cigarettes closely resemble regular cigarettes and could lead people to believe they are allowed to smoke in already smoke-free areas.

Ald. Ann Rainey (8th) was the only opponent of the e-cigarette restriction on the council. She suggested making it the responsibility of individual businesses and establishments to prohibit e-cigarette smoking within their buildings if they wished to do so, rather than creating a city-wide rule.

“I smoked for years. It took me 10 years to quit. It wasn’t easy, and I think many of you probably have never smoked. …I’m just encouraging you to do whatever you can to let people use these,” Rainey said. “I don’t see why we have to take this huge step and disallow them.”

Smoque Vapors lounge owner Jared Yucht said “a thousand” of his customers have quit smoking by using e-cigarettes. However, April Bailey, tobacco program manager for the American Lung Association, said they do not recommend e-cigarettes as safe cessation devices.

“(We) will not recommend them for people to stop smoking because they also reinforce the smoking behavior. They don’t break all the parts of the addiction (such as) the social and behavioral part of actually mimicking smoking,” Bailey said. “We are waiting for the FDA to come back with some more firm guidance.”

Ald. Mark Tendam (6th) said if future studies prove e-cigarettes to be safe, the city can choose to amend their current smoke-free ordinance to allow businesses to apply for an “e-cigarette license” or to simply allow e-cigarette use in certain public spaces.

Ald. Don Wilson (4th) also expressed concern about the products, saying their contents are not as regulated as those in regular cigarettes.

“Anything can be in these products,” he said. “In the absence of any kind of standards, it’s dangerous to put people potentially at risk.”

The Food and Drug Administration is expected to release proposed regulations for the products by the end of the month.