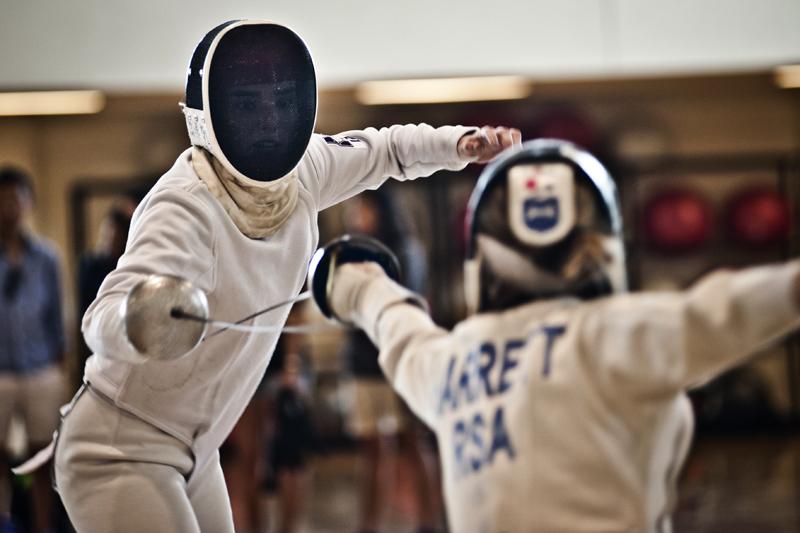 Sophomores Juliana Barrett and Helen Foster face off at the USFA Burton Open on Sep. 28. Barrett ended up with the bronze as Northwestern won gold and silver in all three weapons. The quest for gold will be a lot tougher this weekend.

A hand-crafted battle axe with a 600-year-old history is the prize. Just step, swipe and shift to victory.

Northwestern will host this weekend’s USFA Remenyik Open at the Henry Crown Sports Pavilion, and to the victors go the spoils: specially made weapons from Toledo, Spain.

The Wildcats haven’t seen action with outside competition since last month’s USFA Burton Open on Sept. 28.

The two-day event is not strictly collegiate. The open offers fencers of all ages the opportunity to face off against strong competition from across the country. Several collegiate teams, including returning entrants Notre Dame and Wayne State, as well as many ex-Olympians, are expected to travel to Evanston for the meet.

Having not been able to attend the Burton Open, NU coach Laurie Schiller said he is excited to watch his team in competition for the first time this season.

“I think we’ve got some really good freshmen this year,” Schiller said. “We’ve got some good kids coming back. This is an opportunity to take a look and see how they’re going to stack up against some pretty strong folks. A lot of the people they’re fencing are going to be stronger than most college kids are going to be.”

Though largely inexperienced, with 14 freshmen and a sole senior on the squad, the Cats welcome the strong competition. The high skill level will provide challenges for returning stars such as All-American Courtney Dumas and All-American honoree Dina Bazarbayeva.

Last year, Dumas and Bazarbayeva achieved records of 83-25 and 72-22, respectively, the second and fourth highest winning percentages among NU fencers with at least 75 bouts. To kick off this season, Dumas defeated Bazarbayeva 15-13 in the finals of the Burton Open to collect her third consecutive gold medal in women’s epee at the annual event. The rest of the team also performed well, with NU claiming 19 top-10 finishes across the three weapons. Dumas said she was pleased to see strong results from her young teammates and hopes the progression will continue.

“I think that the team is doing really well,” she said. “It makes me work harder in practice because there’s extra competition. And everybody did well at the last tournament, so I expect good results from this one, too.”

Both Dumas and Schiller emphasized that although the Remenyik won’t count toward the season record total, the event remains an important marker in the team’s self-evaluation process.

“This is what I consider the end of our preseason,” Schiller said. “I look at it as an opportunity to show what we can do at this point in the season and then use that as a building block to correct and change and focus on the next part of the season, which is the beginning of dual meets.”

Schiller admitted, however, that finding quality competition for his fencers is not the sole aim in hosting such a competition. When he started the tournament in his first year as head coach in 1978, his primary goal was to collect revenue for the fencing team. Now in its 36th installment, Schiller explained the tournament serves to highlight the strong tradition of NU fencing to the public more than to bring money to the program.

“For me, it’s a good way to draw a lot of strong fencers to Northwestern, and some of those are potential recruits,” Schiller said.

The tournament has grown in popularity in large part because it manages to do all the little things right. Schiller believes that he “runs the tournament well,” flying in high-quality referees and presenting the hand-crafted weapons as trophies.

With so much to keep in mind in preparing for the tournament, Schiller said his most important task this weekend is coaching and evaluating his team.

“When you’ve got such a young group, it’s wide open right now,” he said. “I’m looking for good things, but I’ve got to see how the competition’s going to go, and in the next few weeks I’ll get a much better idea of how this team is going to function.”