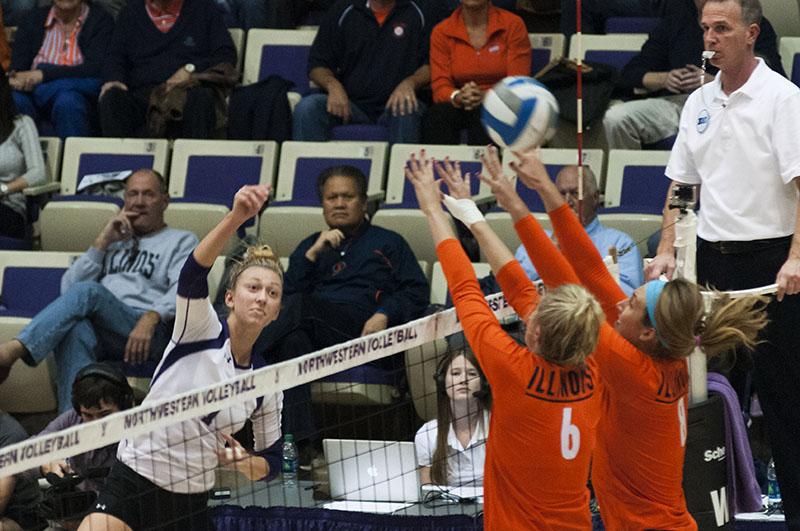 Senior outside hitter Stephanie Holthus slams the ball over Illinois on Wednesday night. The Wildcats came from behind to win three consecutive sets and seal the 3-2 victory over the Fighting Illini in Welsh-Ryan Arena. Northwestern zoomed ahead off the fuel of 28 Holthus kills.

“(The Fighting Illini) run a very high ball offense,” coach Keylor Chan said. “It’s very unique in the Big Ten, and our timing was off.”

Blocking is especially important against a team as tall as Illinois. Dorn and Mayers are 6 foot 3 inches and 6 foot 4 inches, respectively. McMahon towers an extra two inches over Mayers. Illinois’ hitters seemed to be finding every hole and seam in the Cats’ block and convincingly took the first two sets.

Going into the intermission, NU was reeling from a traumatic five-set losing streak, stemming from the Penn State game Sunday. Right side attacker Katie Dutchman, in particular, was having one of the worst outings of her three-year career against Illinois. She was set 21 times, but came out of the second set with only a .095 hitting percentage.

“Our coach came into the locker room and kind of got on us a little bit,” Dutchman said. “He got on a few players and really lit a fire under us because we really weren’t standing up to them enough, so we came back out and we realized that we could play a lot better.”

After being outplayed during the first two sets, NU came out on fire during the third set behind smart serving from redshirt sophomore libero Caroline Niedospial.

The Cats rushed to a quick 9-2 start and rode it to a decisive 25-19 victory to stay in the match.

Chan also made several changes to the rotation during the third set that sparked the team. The first was having Niedospial stay in and serve instead of freshman serving specialist Abbie Kraus. The second was to sub junior attacker Yewande Akanbi for struggling outside hitter Kayla Morin in the front row.

“(Kraus and Morin) were working hard,” Chan said. “It just wasn’t their night. That’s why you have a team.”

Playing with renewed passion and an astoundingly tight block, NU parlayed its third set victory into an electrifying three-set run. When asked how the team dug itself out of such a large hole, Chan had a short explanation.

“Play like you did in those last three sets,” he said.

During the Cats’ comeback, star outside hitter Stephanie Holthus passed Erika Lange (2000-2003) on NU’s all-time kills list, climbing to the second position. The senior finished the game with 1,628 career kills and only needs 38 more kills to reach the top spot.

Holthus echoed Chan and was quick to point the attention away from herself and toward the rest of the team.

“It’s amazing, don’t get me wrong,” she said. “But I have to pass a lot of credit on to my team. We’re playing really well right now, and it’s really allowing me to take some good, aggressive swings.”