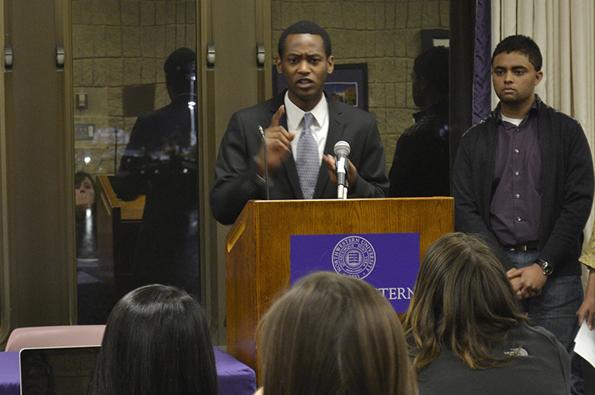 Associated Student Government Senate unanimously approved sophomore Thaddeus Tukes at its meeting Wednesday as associate vice president of diversity and inclusion, a position that has been vacant since Spring Quarter.

“I think he’s fantastic,” said student life vice president Anna Kottenstette, a Communication senior and former Daily staffer, who added that Tukes convinced the selection committee in his interview he was the right person for the position. “The way that he spoke and the way that he made everyone believe in what he was saying, we thought would be incredibly important for this position and really contagious on campus.”

Last year, ASG made two failed attempts to fill the position left vacant by Hayley Stevens (Weinberg ‘13) in May.

The ASG executive board “revamped” the position this fall, president Ani Ajith said.

Although Tukes said he found out the position was open only the night before the application was due, the Medill-Bienen dual degree student expressed his enthusiasm for the role during his speech to Senate on Wednesday.

“I applied for this position because, not only observing events at the school last year but also this year and speaking with different heads of organizations of different underrepresented groups, I saw a lot of holes not only in communication but representation,” Tukes said. “I wanted to be an ambassador for these groups.”

In his introduction of Tukes, Ajith, a Weinberg senior and former Daily staffer, said the position is not meant to assist only minority groups.

“The position is supposed to serve all students on campus, not just students that look like me,” Ajith said.

Tukes said he wanted to clarify that diversity is a very broad term and said many groups on campus are minorities, including music students and students in Greek organizations.

“It’s not just race or gender,” he said.

As the only Northwestern student studying both jazz and journalism, Tukes said he knows firsthand about being a minority. He also said his work for Pulse magazine and for his own band have prepared him for his new position.

“A lot of what I’m doing as vice president of diversity and inclusion are things that I do every day, just on a smaller scale,” he said.

Tukes said he is prepared for the challenges the position presents.

“What I would try to do and will do is create safe spaces,” he said. “Yes, this will be emotional, yes, this can be touchy, yes, you might be offended, but let’s at least approach this and work through that because that’s the only way we’re going to get past it.”