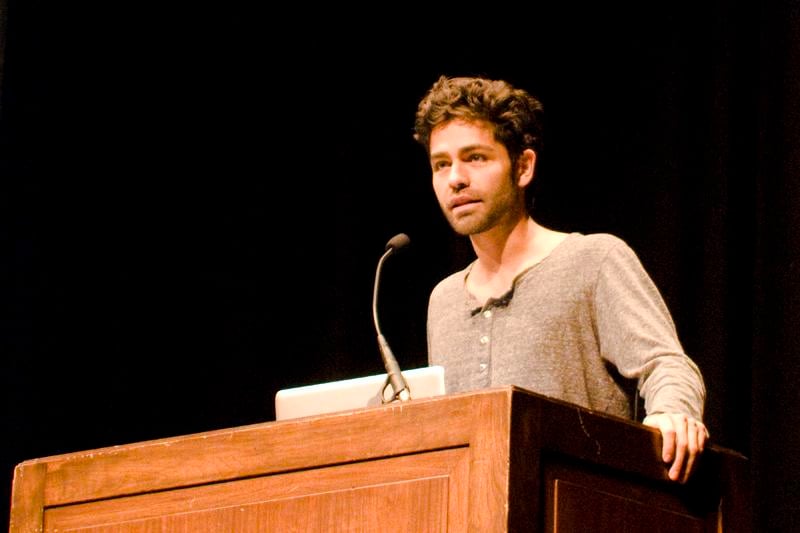 ctor Adrian Grenier speaks about environmentalism at SEED’s fall speaker event Tuesday evening. SEED organized the talk as part of the annual Green Cup competition, which has been moved to Fall Quarter this year.

For actor and activist Adrian Grenier, environmentalism is hardly a full-time job.

Grenier started off his talk Tuesday night at Cahn Auditorium describing himself as an “environmental-ish,” as opposed to an environmentalist.

“I am not an expert, but I have done my darndest as a layman to participate in the environment effort,” he said.

Grenier discussed his involvement in the environmental movement as this year’s Students for Ecological and Environmental Development fall speaker. Grenier’s talk also marked the beginning of the annual month-long Green Cup competition, which encourages environmental awareness on campus.

“Adrian is best known as an actor, not an environmentalist, and his interest in the environment demonstrates exactly what SEED hopes to communicate this year — the environment relates to many lifestyles and issues,” said Corbin, a former Daily staffer.

The actor and filmmaker, known for his roles in “Entourage” and “The Devil Wears Prada,” spoke about how easy it is to be sustainable as individuals and communities.

He encouraged students to see the larger picture and to think creatively about environmental solutions that can be blended seamlessly into their daily lifestyles. Grenier suggested people take on the challenge of making small, attainable goals in order to reach the sweet spot between “neurotic obsession” and “erratic apathy” about environmentalism.

McCormick sophomore Zak Kivitz said he went to the talk expecting just another celebrity who was simply the “face behind the cause” but was surprised to find that Grenier was truly passionate about the environment.

Before the speech, SEED executive board members said they hoped the event would encourage students to learn about environmentalism in the context of the NU community.

SEED is collaborating with several campus organizations, including One Book One Northwestern, Northwestern Community Development Corps, Alianza and For Members Only for upcoming Green Cup events.

In previous years, the Green Cup competition was held in February; however, organizers decided to move the date to Fall Quarter due to reduced participation during the winter.

“We’re very excited for the Adrian Grenier event to kick off our first fall Green Cup,” Corbin said. “Reductions of electricity and water use in residence halls and Greek houses are already being measured, and this event is the first opportunity to gain participant points for Green Cup.”