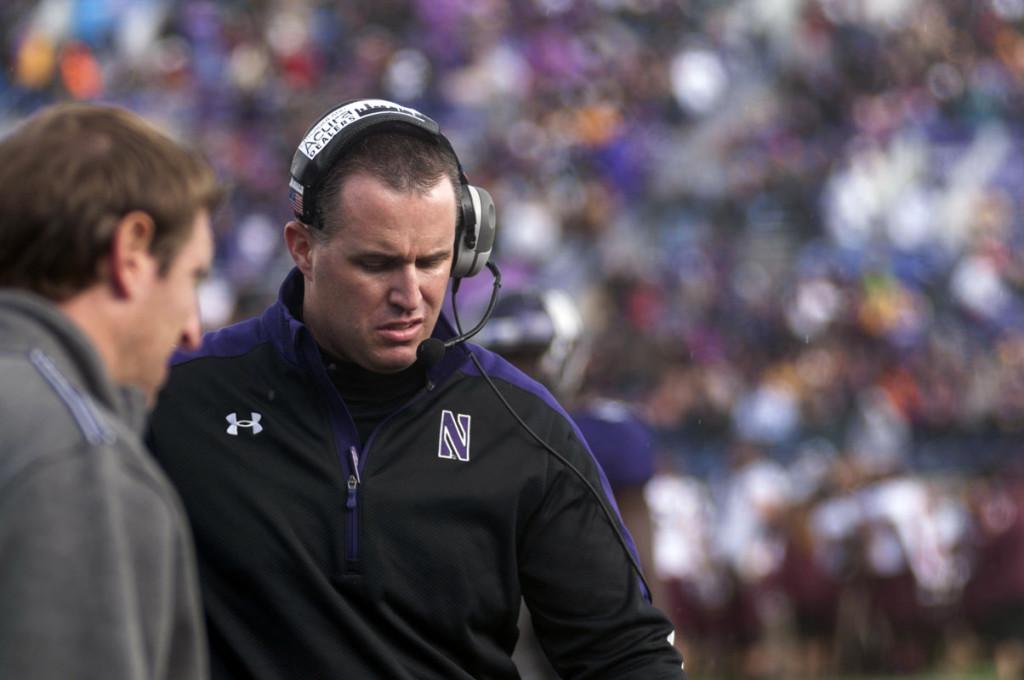 Pat Fitzgerald attempted to explain NU’s recent offensive failures at his weekly press conference Monday. The coach questioned his team’s effort saying, “If I’ve got to coach effort for any of our guys, then they’re not going to play.”

If Northwestern is going to end its losing streak this weekend against Iowa, it has to do so without senior running back Venric Mark.

Coach Pat Fitzgerald announced Monday that his electrifying playmaker will miss Saturday’s game and said he is unsure how much more time Mark will miss after that. The senior injured his hamstring during training camp in the fall and missed most of the Cats’ non-conference games. He was able to return for the game against Ohio State but was injured again the following week early in the game against Wisconsin.

NU’s offense has been in disarray since conference play started. The Cats have scored only 23 points in their past two games after having a streak of seven games of scoring 30 points or more entering their contest against Wisconsin. Fitzgerald made it clear on Monday that all his offenders are on notice.

“We’re not being successful enough on offense right now for us to win,” he said. “With that comes that vein that we always have in our program of competition. If guys don’t show us consistent effort of improvement this week, we’re going to start rotating guys at different positions.”

Execution has been the word Fitzgerald has stressed most when it comes to his offense’s struggles. He said the Cats have beaten themselves recently, which has resulted in their three-game losing streak. But Fitzgerald still thinks the high character of his players will help turn around NU’s misfortunes .

“Our offense has really caused us to be in a hole,” he said. “The only way we’re going to get out of it is to fight and scratch our way out of it. I believe those guys will do that.”

To make matters worse, the rushing attack that used to be the strength of the offense has failed to go more than 100 yards for three consecutive games. The offensive line has also seen its fair share of troubles blocking defenders at the point of attack, an issue that Fitzgerald compared to “a Picasso looking like puke”.

Fitzgerald said the mistakes are correctable but that his offense needs to have a sense of urgency all the time.

“When we did that on Saturday, we moved the ball pretty well,” he said. “Other times, I’m looking at the effort level of some of our guys that have played a lot of football for us, and it’s unacceptable. It’s not up to the standard that we believe in, and that’s a choice. If I’ve got to coach effort for any of our guys then they’re not going to play.”

Redshirt freshman running back Stephen Buckley, who scored his first career rushing touchdown Saturday against Minnesota, acknowledged that players sometimes push too hard on offense and need to focus on what they have to do individually each play.

“As players we try to do more than we are asked to do,” he said. “I just think that we need to focus on our job. That’s one of the things that Coach Fitz tries to stress a lot. … If we focus on our job and what we do, we’ll be able to go out there and execute.”