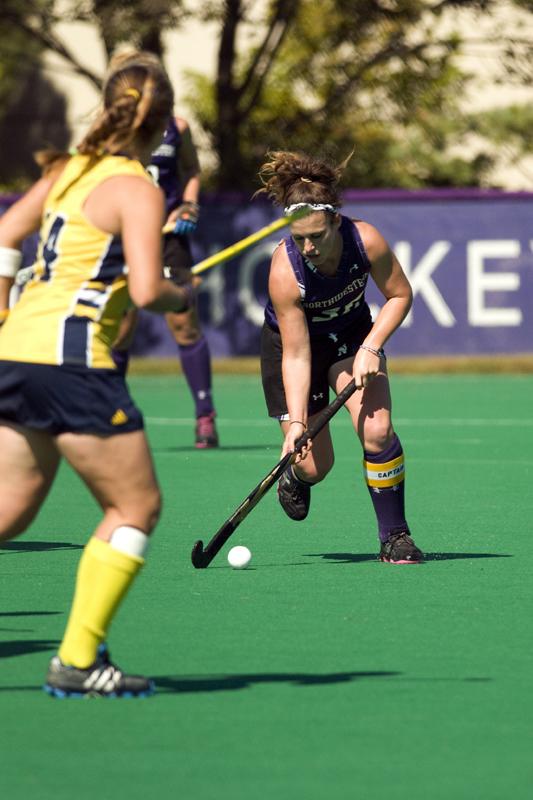 Nikki Parsley and the Cats split a pair of matches over the weekend, beating Indiana 2-0 Friday before falling to No. 17 Louisville on Sunday. Parsley scored both goals against the Hoosiers, her ninth and tenth of the season.

Northwestern allowed only eight shots all weekend yet came out with one win instead of two.

Senior midfielder Nikki Parsley led the offense against the Hoosiers on Friday for the Wildcats. She scored both goals of the game in the first half, though the defense held Indiana to only two shots all game.

“Nikki controlled the ball and the offense,” coach Tracey Fuchs said. “The defense didn’t let up any field shots.”

The two shots that Indiana tried weren’t on goal, proof NU’s defense shut down any attack the opponent might have launched during the game. The Cats’ junior goalkeeper Maddy Carpenter didn’t have to move much at all. The defensive strength coupled with Parsley’s presence made for a deadly combination.

Parsley’s first goal came off a penalty corner and pass from freshman midfielder Dominique Masters, and the second one Parsley took herself past the hash marks and shot a laser across to the far post. The team even planned to shoot for wide-out goals, their best way of scoring, senior midfielder Julia Retzky said.

“The first goal was just an awesome ball from Dom (Masters),” Parsley said. “I put my stick down just in case, and it was a perfect ball. The second goal was kind of one you just dream of. I just took it myself and thought I should probably pass it but there was no pressure, and I just ripped it.”

The Louisville game was a defensive battle as well. NU’s defense let the No. 17 Cardinals shoot just six times, but, unfortunately for the Cats, two got past Carpenter. On the Louisville side, goalkeeper Sydney King made ten saves.

“It was the best defensive effort I’ve seen since I’ve been here,” Fuchs said.

Leading the attack was senior midfielder Tara Puffenberger with six shots, five on goal. Arguably the most aggressive player for NU, Puffenberger has the most shots on goal this season with 38, but racked up only 5 goals total.

“(Puffenberger) had some great shots in the game, the goalie just got a piece of them,” Fuchs said.

The Cats had plenty of opportunities to score but could not convert offensively, Puffenberger said. On the defensive side for NU, Louisville only scored off-penalty corners. This weekend the Cats’ defense withstood the challenge of two competitive squads, and the offense created opportunities. This leads one to believe NU has little to work on.

“We’ll definitely be working on corners this week,” she said. “We can’t let teams go two and five on corners on us.”

Parsley said it is crucial to learn from the loss — there are tactical things for the team to work on.  The team needs to find ways to score, especially with the Cats taking on conference opponent Michigan State next weekend.

The offensive aggressiveness and defensive staunchness is there, but NU needs to tweak a few things in order to roll through the rest of its schedule and into the post-season.