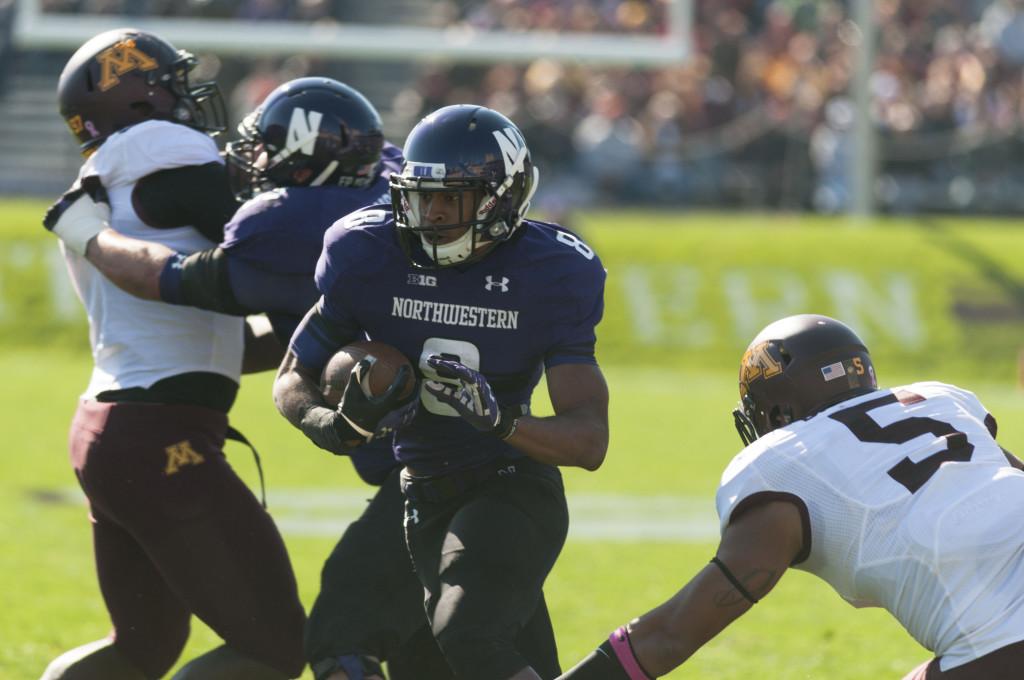 Redshirt freshman Stephen Buckley finds a hole in the Minnesota defense at Ryan Field. The running back accrued 58 yards for the Wildcats, their best performer on the ground. He scored his first career touchdown Saturday.

Northwestern’s game kicked off 11 a.m. Saturday, and the Wildcats played like they forgot their morning cup of coffee.

“We’ve just got to play better, is what it comes down to,” junior linebacker Collin Ellis said flatly. “We didn’t play well today, and that’s pretty much how it is.”

As coach Pat Fitzgerald said of the interception, “Obviously the choice to make that throw he’d love to have back.”

NU led in the first quarter, when redshirt freshman running back Stephen Buckley carried — literally — the Cats to a first-quarter score. Buckley accounted for 54 of NU’s 72 yards on the drive, including a 33-yard rush and the three-yard touchdown, the first of his career.

Nevertheless, the Cats’ offensive stagnancy continued, a week after scoring only 6 points in a blowout loss to Wisconsin. Saturday, the Cats turned over the ball three times and punted on six possessions. They gained more than half of their total yards on three scoring drives and were otherwise unproductive.

Largely ineffective through 3 1/2 quarters, Siemian heated up late, finding junior receiver Tony Jones for a back-shoulder touchdown catch with two minutes to play. But Minnesota responded with a game-clinching first down, and afterward, Siemian’s two interceptions resonated louder than his 25 completions.

“Mistakes were made,” junior receiver Christian Jones said when asked about Siemian’s play. “A lot of guys made mistakes. … When somebody makes a mistake, everyone else has to pick it up around them. I couldn’t tell you who made mistakes, I was just trying to focus on myself.”

Minnesota’s lone offensive score came via a Philip Nelson 29-yard touchdown pass with 6 minutes and 48 seconds to play in the second quarter. NU redshirt freshman cornerback Dwight White appeared to stumble on the coverage, allowing Minnesota receiver Derrick Engel to slip behind him for the big gain. White was benched and played sporadically thereafter.

Apart from the touchdown play, NU’s defense was fairly sturdy, holding Minnesota to 299 yards of offense. But the unit failed to produce the big play that has defined it all season. Saturday marked the first game this year in which the Cats have not forced a turnover.

“We had two opportunities to get turnovers there,” Fitzgerald said, referring to a pair of fumbles NU failed to recover. “That obviously makes a huge difference in the outcome of the game.”

The loss, NU’s third in a row, effectively ends the Cats’ aspirations of winning the Big Ten’s Legends division and raises doubt about the future for a team once considered one of the conference’s best. Each of NU’s remaining opponents have better records — in conference and overall — than the Cats. The losing streak is NU’s longest since the team dropped five in a row early in the 2011 season.

“If we were playing great and losing that would be tough,” Fitzgerald said. “It’s not like we’re playing great. There’s a lot of room for improvement.”