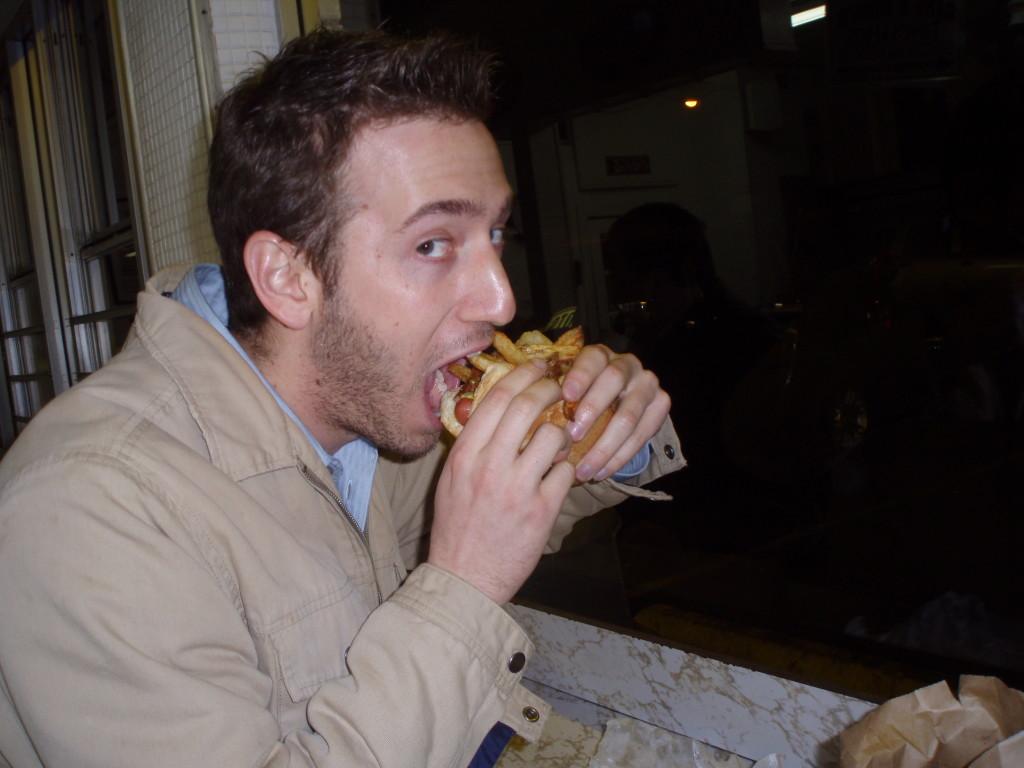 If you’re eating out in a Chicago restaurant and the guy next to you is snapping an obnoxious number of pictures of his meal, chances are his name is Jeff Pearl, and those photos are about to appear on his food blog, “Jeff Eats Chicago”.

Described as “one man’s journey through a city of food,” the blog consists of written reviews that accompany the pictures Pearl (Feinberg ’13) takes, along with a rating for each meal. The rating is based on a five-point scale, or the five “Pearl” scale. Pearl, who is only 26, isn’t a foodie, and he hasn’t been trained in the culinary arts. As he says, “I was a fat kid. Does that count?” His opinion is valued because he compares restaurants instead of focusing on the nitpicky things the average diner wouldn’t care about.

“I don’t know what to say about something if I’ve never eaten it before, but I can pretty much say that this pasta is better or worse than 10 other Italian pastas in the city,” Pearl said.

Pearl’s blog began about four years ago when classmates began to pester him for restaurant suggestions in the area.

“I grew up in the suburbs of Chicago, and people kind of assumed I knew these things, even though I had no idea,” Pearl said. “I was kind of pushed into that position.”

Pearl began to email lists of his favorite spots to his classmates, and one of those lists ended up in the inbox of a CBS employee. CBS needed someone to write a food blog for Chicago, and Pearl got the job. Four years later, the blog is still going strong. A readership that began with a few classmates and Pearl’s mother has grown into almost 6,000 monthly visitors to the website.

One of Pearl’s friends from his undergrad years, Marc Kovarsky, occasionally contributes to Jeff Eats Chicago.

“I think the best blogs are the ones that are always changing and updating,” Kovarsky said. “It’s amazing with how busy Jeff is that he keeps updating it.”

Food blogging isn’t a full-time gig, and even though Pearl has picked up some freelance jobs writing for Foodie.com and The Huffington Post, his career lies along a completely different path. Pearl attended Northwestern for medical school and is now working on his surgery residency at Northwestern Memorial Hospital. His affiliation with NU ends there, though.

“There was one time the deans asked me if I wanted to have them send out links to my website,” Pearl said. “But then I’d have to take out all the inappropriate jokes. I said I would pass. I haven’t got any more love from the university since then.”

Pearl does have his own writing style, and though it may not win prizes for stunning grammar or eloquent phrasing, it is effective and entertaining. But for a man who studied engineering as an undergrad and is now pursuing a medical career, even his relaxed posts can be a lot.

“I totally get sick of writing,” Pearl said. “I always have friends calling me up saying I misspelled something or used the wrong tense. I have no background in writing.”

When Pearl comes across a meal he doesn’t like, he doesn’t shy away from writing an angry, and often funny, review. He views these as his better posts, although they do spark some backlash from restaurants.

“If I wrote something they think is inaccurate or rude, there are times when I’ll get a ‘go screw yourself’ email,” Pearl said.

His friends also refuse to cook for him even though he swears he would never tell somebody their meals are awful.

There are times when critiquing food can even be hazardous to his health. Pearl was once asked to be a judge at Wingfest, where he ended up eating about 16 wings every hour.

“I waddled out of there, (and) I felt like garbage,” Pearl said. “I’m pretty sure I developed acid reflux from that meal.”

Pearl also gets sick of eating out, which is understandable. He estimates he has eaten in almost 500 different restaurants in Chicago over the past four years. That’s a lot of menus, entrees and reviews for someone who appreciates staying in for dinner just as much as going out.

For now, it’s Pearl’s job to get out there and explore the restaurants of the Chicago area. He’s covered 500, which leaves just a couple thousand more. Just don’t ask him which of the 500 is his favorite.

“That’s a completely unfair question. Absolutely ridiculous,” Pearl said. Apparently, there are just too many to choose from.