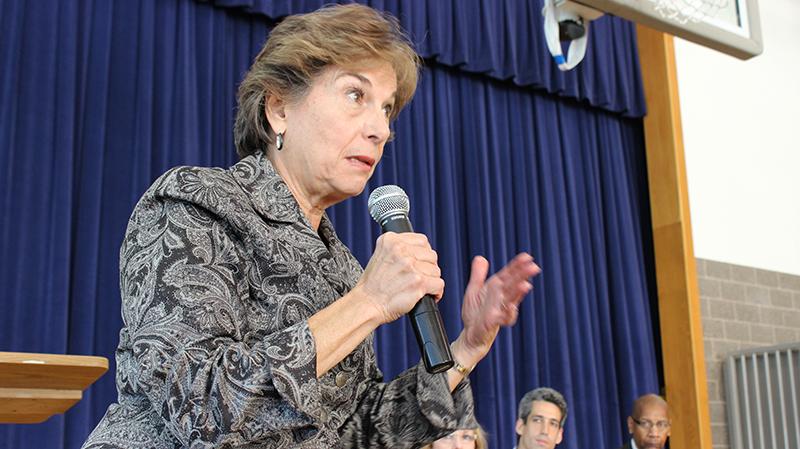 Rep. Jan Schakowsky (D-Ill.) speaks during a panel discussion Sunday at the Levy Senior Center, 300 Dodge Ave. The talk focused on how Evanston residents can benefit from the Affordable Care Act .

Almost two weeks after the Affordable Care Act’s health insurance marketplaces opened, a panel of Illinois government officials praised the law’s benefits but said they hope for a state-based exchange in the future.

“What we see unfortunately across the country is a really ugly, irrational fight about (the ACA),” Biss said. “This is a really extraordinary offer the federal government is making to states, saying to states, ‘If you are willing to provide insurance to many of your poorest residents, we’ll pay for it.’ Not a hard decision!”

Gabel cited the success of the state’s health insurance enrollment portal, GetCoveredIllinois.gov, saying it processed 1,100 applications in the first 18 hours Oct. 1. She compared that number with the 3,000 applications per month the state received prior to the ACA as an argument for a solely state-based exchange.

In addition to avoiding some of the technological problems the ACA’s national rollout, Gabel said having a state exchange would give Illinois independence from the federal government.

“If Illinois does not have its own state exchange, it abdicates all oversight and decision-making powers in terms of decertifying or certifying organizations to be on the exchange,” Gabel said. “It loses our ability to enable stronger quality care measures, and we will also lose those federal dollars that we already got if we don’t have an exchange.”

Gabel said the Illinois General Assembly hopes to approve a similar bill by 2015 or 2016 at the latest. She urged attendees to ask their elected representatives to support it.

After the panel discussion, Biss told The Daily he believed most of the audience’s questions and his constituents’ concerns in general spawn not from disapproval of the act, but from a lack of understanding it.

“It’s a complicated law. There’s a ton of conflicting information out there about it, and people are confused and need to know,” Biss said. “That’s why we did this. We wanted to have information there.”