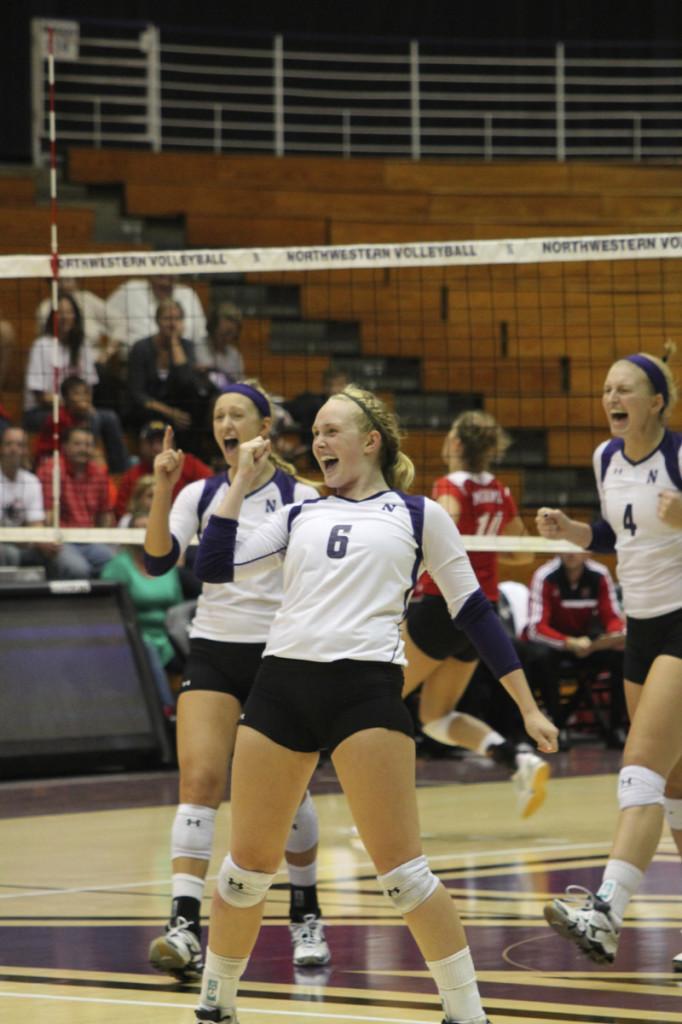 Freshman setter Caleigh Ryan celebrates with her teammates during the Wildcat Classic in September. Northwestern defeated both Indiana and Purdue in five-set thrillers on the road this weekend. Ryan received the Big Ten Freshman of the Week award for her efforts.

It took the full 10 sets, but the Wildcats pulled out a pair of crucial victories over the weekend.

For the second straight week, Northwestern (11-7, 3-3 Big Ten) faced two Big Ten squads on the road. The first installment offered up a disappointing result, with NU falling to No. 5 Michigan State and No. 16 Michigan.

In the sequel though, the Cats rebounded. On Friday night, NU traveled to Bloomington, Ind., to take on the Hoosiers (8-9, 0-6), a team that had dropped six straight coming into the match. The losing skid aside, Indiana had dragged No. 17 Ohio State to five sets before ultimately coming up short.

Against NU, that same fight remained. Indiana won two of the first three sets and appeared to have its visiting foes on the ropes. Unfortunately for the Hoosiers, the Cats retained that fighting spirit.

NU burst out to a 9-2 lead in set number four and cruised to a 25-15 victory. A new stanza brought similar vibes, with the Cats producing a 15-8 showing that sealed the win.

The Hoosiers accumulated 17 attacking errors and hit at a -.078 rate in the final two sets, a sign that the squad may have felt some discomfort down the stretch.

“We did really well on our first contacts,” Chan said. “We forced them to do things that they weren’t necessarily comfortable doing, and we were able to execute some scouting things we had been working on. It really made a big difference in sets four and five. We were able to take certain things away from them and it worked.”

If that first match was a barn-burner though, the Cats’ second one quickly became an instant classic.

The Cats pulled out the second stanza 25-23 and captured the third 29-27, after five set points had been exhausted between the two squads. The craziness continued, as Purdue snuck through 25-21 in set four and gave themselves two match points in the fifth and deciding set.

The Boilermakers couldn’t capitalize on either opportunity, and after NU dropped the ball on four chances of its own, the visitors finally closed on the fifth occasion, sealing the set 21-19 and the match 3-2 when Purdue misfired on its final attack.

In the two matches, NU hit at a .221 rate, a week after a .134 percentage prevailed against Michigan and Michigan State.

“It was much better,” Dutchman said. “Last week, we weren’t aggressive. This past weekend, we were finding more ways to score and there was just a lot more communication on helping each other out where to swing and where to find open spots.”

That attack also involved a number of parts. Against Indiana, five players had at least eight kills and the Purdue match put four Cats in double-digits.

Setter Caleigh Ryan, who claimed her second Big Ten Freshman of the Week award after these matches, was pleased with the all-around effort.

“We were really balanced and it goes back to the passing,” Ryan said. “But everybody was taking hard, aggressive swings, which really helps me distribute the offense and know that different people can get kills at different times.”

The defense played its part too, as NU was able to gather up 34 more total attacks than Purdue in their match in West Lafayette, Ind.

All the cogs meshed together in these two victories and Chan walked away proud of that fact.

“The whole entire team pulled together and did what they could to help our team to the result we wanted,” Chan said. “That’s what you have to do in the Big Ten, you have to win and lose as a team and that’s what our team did a great job with.”