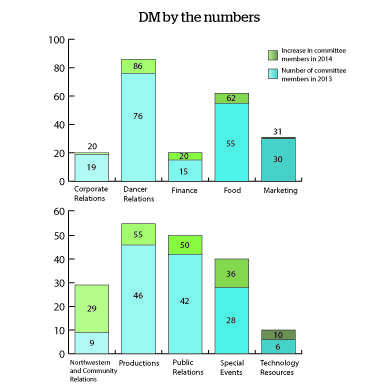 As Northwestern University Dance Marathon plans its 40th anniversary throughout the fall, it will have the help of another record number of committee members. The organization received more than 600 applicants and increased its overall size by about 70 students.

DM accepted 391 students this year, up from 320 last year, to the groups that will plan and execute the University’s largest philanthropy, scheduled for March 7-9, 2014. This year’s primary beneficiary, Team Joseph, is an organization that aims to find a cure or treatment for Duchenne muscular dystrophy.

“We definitely advertised a little bit more with the applications and worked on getting the word out there,” executive co-chair Anna Radoff said. “We didn’t expect such an increase in numbers, but I think it speaks to what a great organization Dance Marathon is and how there are so many ways to get involved.”

Radoff, a Weinberg senior, said the co-chairs of each committee approached her and fellow co-chair Josh Parish about increasing the number of members in each group. Each of the 10 teams saw a boost.

The Northwestern and Community Relations committee experienced the largest proportional growth, increasing from 9 members last academic year to 29. NCR co-chair Samir Datta said he was excited about the jump and said it would help reach out to the “underutilized” alumni network in the Evanston community and beyond. The committee works closely with the organization’s secondary beneficiary, the Evanston Community Foundation.

“There are a lot of alumni who are so enthusiastic about DM but they haven’t had anyone to reach out to them about getting involved,” said Datta, a Weinberg senior.

Datta said some of the group’s projects this year include bringing a mini dance marathon to local high schools, which has been a project in the past, reaching out to international alumni groups in places such as Beijing and Singapore and analyzing the impact the organization has had on past beneficiaries.

“We feel that a lot of people see DM as, we fundraise for a year, throw money at a charity and walk away,” he said. “People don’t really know the impact it has, and we want to research that more.”

Richard Goldring, a Weinberg senior who has been a member of the NCR committee since his freshman year, said seeing how people within the community from ECF and Evanston Township High School look up to and benefit from DM brought him back to the group each year.

He said it was difficult with the smaller group last year to accomplish everything it initially planned.

“Even though the committee as a group worked a lot better because we were all working on the same projects, we lacked the manpower to get everything done,” Goldring said. “With 29 people this year we’ll hopefully be able to make stuff happen.”

Radoff said the next step for all of the committees is to get through dancer registration, which opens next week. She said she is confident all the co-chairs will be able to accommodate their expanded membership.

“I think our exec board is going to rise to the challenge and lead these larger committees,” she said. “And with our 40th anniversary, we really have an incredible opportunity to show the entire campus and the community what we can do.”