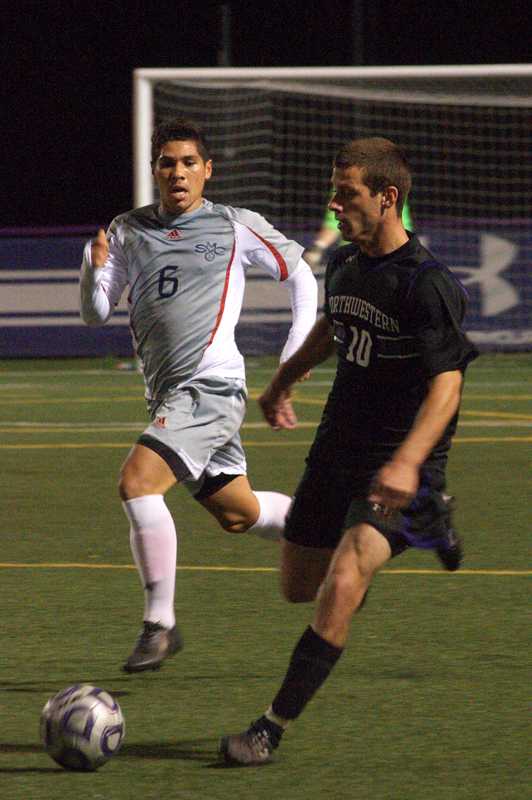 Sophomore forward Joey Calistri controls the ball in Northwestern’s match against St. Mary’s in late September. The Wildcats’ leading scorer had multiple opportunities Saturday against the Cougars, but failed to find the back of the net in the no-score draw.

The No. 14 Wildcats (8-3-1) were played to a scoreless draw by Southern Illinois University Edwardsville (5-5-1) in the final match of a four-game home stand. The tie was the second instance in three games that the Cats have played multiple overtimes.

It was a contest defined by missed opportunities for both teams.

Without freshman midfielder Brandon Medina, who was sidelined with a left knee injury, NU wasn’t able to generate pressure early. The Cats’ first chance didn’t come until the 8th minute, when senior midfielders Chris Ritter and Lepe Setanee had an impressive run deep into the Cougars’ box. Setanee was primed to shoot from 10 yards out, but SIUE goalkeeper John Berner came off his line to make an athletic save.

“You could see the hole in the middle,” coach Tim Lenahan said. “Hopefully (Medina) gets better, but if he doesn’t we need to find a way to replace him.”

The Cougars counterattacked midway through the first half. SIUE had a great chance off a throw-in set piece that was denied by Cats junior goalkeeper Tyler Miller. On the ensuing corner kick, Miller stopped another header to keep the game scoreless.

There was a flurry of activity from NU to end the half, but the Cats failed to capitalize on numerous corner and free kicks. They did not record a single shot on goal Saturday.

The action slowed in the second half, with both teams digging in to try and grind out a win. Nine minutes in, the Cougars took a free kick from five yards outside of the box, but SIUE striker Lewis Ellis blasted his shot right into the NU wall.

Sophomore forward Joey Calistri, the Cats’ leading goal scorer with 10 tallies on the season, began to heat up later in the half. Calistri had several good runs deep into the box and had a shot in the 59th minute that was deflected just wide of the net by a Cougars defender.

“Today was just kind of a grinding day,” Calistri said. “It wasn’t the best soccer we’ve played all year. To grind out a tie isn’t the worst result, but it’s definitely not a result that we’re too happy with.”

SIUE threatened at the end of regulation, making a strong push to try and stop the game from going to overtime. Cougars forward Christian Volesky, who has 4 goals this fall, headed a pass five yards from the net but narrowly missed over the crossbar. Minutes later, Miller punched away an SIUE corner kick to preserve the tie.

“We just didn’t have it tonight,” Lenahan said. “The other team played very well. … We have to play better soccer. We had little bursts where we had some flow, but for the most part we were just kicking the ball long and hoping for something lucky.”

The course of the match didn’t change during the extra periods. NU’s best chance came with two minutes to go in the second overtime. Calistri got a ball behind the Cougars’ defense and pushed it into the box. He crossed to freshman midfielder Jeffrey Hopson, whose shot was broken up at the last second by an SIUE defender.

It was the final scoring opportunity of the 0-0 game.

“We got a second shutout in a row,” Lenahan said. “This is the first overtime game since DePaul that we (didn’t lose). Those are the positives, but we need to play better soccer. … We’ve got a big game on Tuesday against Notre Dame, probably the best team I’ve seen in the country so far.”