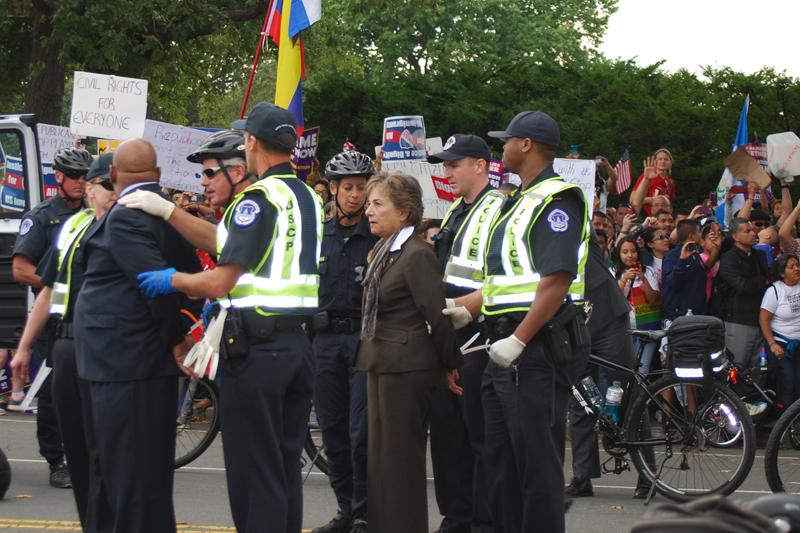 U.S. Rep. Jan Schakowsky (D-Evanston) was arrested Tuesday afternoon at an immigration reform rally in the nation’s capital. She was released shortly after 7 p.m.

Democratic Rep. Jan Schakowsky of Evanston said Wednesday she was “proud to join” about 200 demonstrators arrested during an immigration reform protest in Washington, D.C.

Schakowsky was let out of police custody Tuesday night, about three hours after Capitol Police started arresting the protesters near the National Mall. Photos released by her office show two officers escorting the congresswoman toward a police van with her wrists tied together.

The congresswoman had to pay a $50 fine before she was released shortly after 7 p.m., Schakowsky spokeswoman Sabrina Singh said.

Schakowsky, seven other members of Congress and the rest of the protesters were charged with “crowding, obstructing and incommoding,” according to Capitol Police and rally organizers. They were all processed and released by Wednesday morning.

Writing for the Huffington Post, Schakowsky explained her decision to block a street with several other legislators of Congress during the rally. As she surveyed the police station, she said she was encouraged to see so many people using civil disobedience to push for immigration legislation, which has reached an impasse in the House after the Senate approved a reform bill earlier this year.

“As someone who represents one of the most diverse districts in Illinois with a large immigrant populations representing countries in every corner of the globe, I have seen firsthand the consequences of our broken immigration system — families tragically separated, workers unfairly and dangerously exploited, young people denied opportunities to serve their country, and the stress of living with the constant fear of deportation,” Schakowsky wrote. “Immigration reform is for those thousands of people in my district and the millions of people across the country who want nothing more than to work hard, provide for their families, and reach for the American Dream.”

Schakowsky added that immigration reform would not just help the 11 million people living in the country illegally. It would also benefit the economy, she wrote, citing the Congressional Budget Office’s estimate that the Senate bill would cut the federal deficit by about $850 billion and boost economic growth by about 3.3 percent.

More than 20,000 people attended the six-hour rally, according to the Center for Community Change.