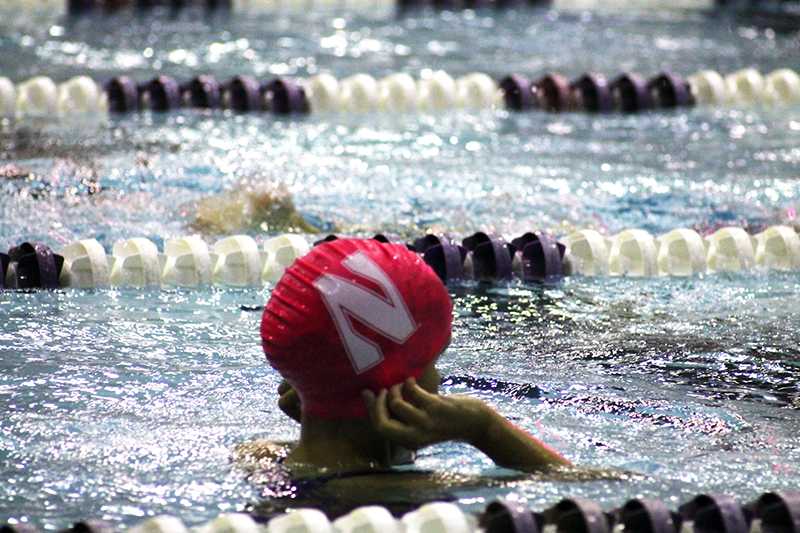 A swimmer adjusts her cap at the swim-a-thon. Wednesday's event drew participants from organizations including Northwestern athletic teams and local swimming organizations.

Held in honor of National Breast Cancer Awareness Month, the hour-long swim-a-thon took place in the Sports Pavilion and Aquatic Center. Participants paid to swim with teams in a relay format continually during the hour. The members of Chicago Masters Swim Club won the relay, swimming a total of 210 laps. Not including online donations, the swimming and diving team raised about $4,400, which will be donated to the Lynn Sage Cancer Research Foundation.

The idea for Breaststroke 4 Breast Cancer originated in the summer of 2011 when team member Megan Goss’ mother was diagnosed with the disease. Goss, a Weinberg senior, became one of the founders of the event.

“Megan is the kind of person who wants to give back,” Goss’ teammate and co-founder Jackie Powell said. “Last year we were on a road trip … and we came up with this idea for a fundraiser in the back of the car, and it just took off from there.”

In its first year, Breaststroke 4 Breast Cancer raised more than $11,000.

“We want to raise money to support research, but this event is obviously way more than that,” women’s swimming and diving coach Jimmy Tierney said. “It’s a special day of people coming together and offering what they can. We want to get as many people connected as we can.

Tierney helped Goss and Powell bring the event to life. He said its atmosphere keeps it going and that community engagement sets the fundraiser apart from others.

“I love the energy,” Tierney said. “We’re all kind of a family here. We’re here not only to take care of each other but also to find ways to give back and to show appreciation for all the gifts we’ve been given. You can’t help but feel good watching everything evolve throughout this special day.”

“This is a great event for an even greater cause, and we’re thankful for any money that we can raise here,” the SESP senior said.