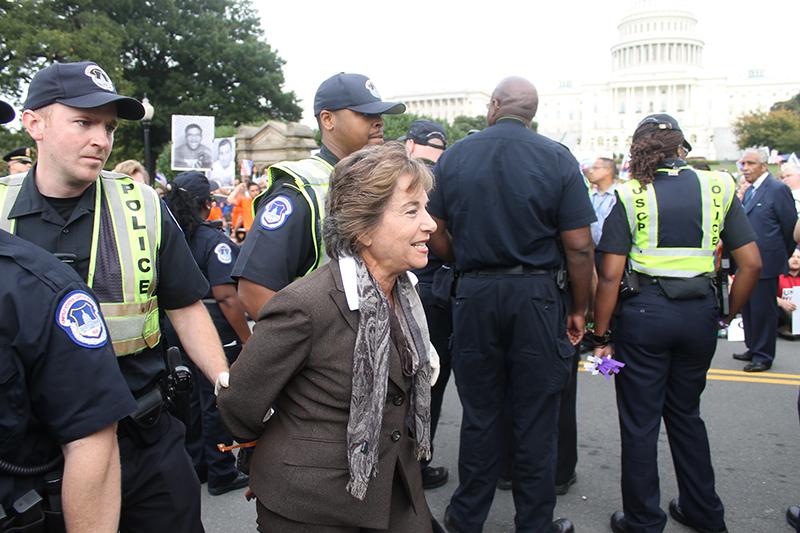 Rep. Jan Schakowsky( D-Evanston) is arrested Tuesday afternoon during an immigration reform protest in Washington, D.C. She was one of about 200 demonstrators taken into custody.

Democratic Rep. Jan Schakowsky of Evanston was among about 200 demonstrators arrested Tuesday afternoon during an immigration reform rally in the nation’s capital.

Schakowsky spokeswoman Sabrina Singh said the congresswoman was blocking a street before she was taken into custody. Capitol Police confirmed the arrests, saying the protesters will be charged with “Crowding, Obstructing, and Incommoding.”

“Rep. Schakowsky stood in solidarity with her colleagues and immigrant rights advocates to demand a House vote on comprehensive immigration,” Singh said in a statement. “She participated in civil disobedience to urge Republican leadership to bring this critical bill for a vote.”

Rep. Luis Gutierrez (D-Ill.) was also arrested during the protest, which was held on the National Mall and titled “Camino Americano: Concert and March for Dignity and Respect.”

The demonstrators were processed and released by Wednesday morning, according to Capitol Police.

Rally organizers had hoped to pressure House Republicans into voting on immigration reform legislation, which has stalled since a Senate bill was passed earlier this year. About three hours after the rally, the White House called on the House GOP to take on the issue.

“The enthusiastic demonstration of support for immigration reform this week has proven to Congress that the broad coalition behind commonsense solutions to our nation’s broken immigration laws is as strong as it has ever been,” White House press secretary Jay Carney said in a statement.