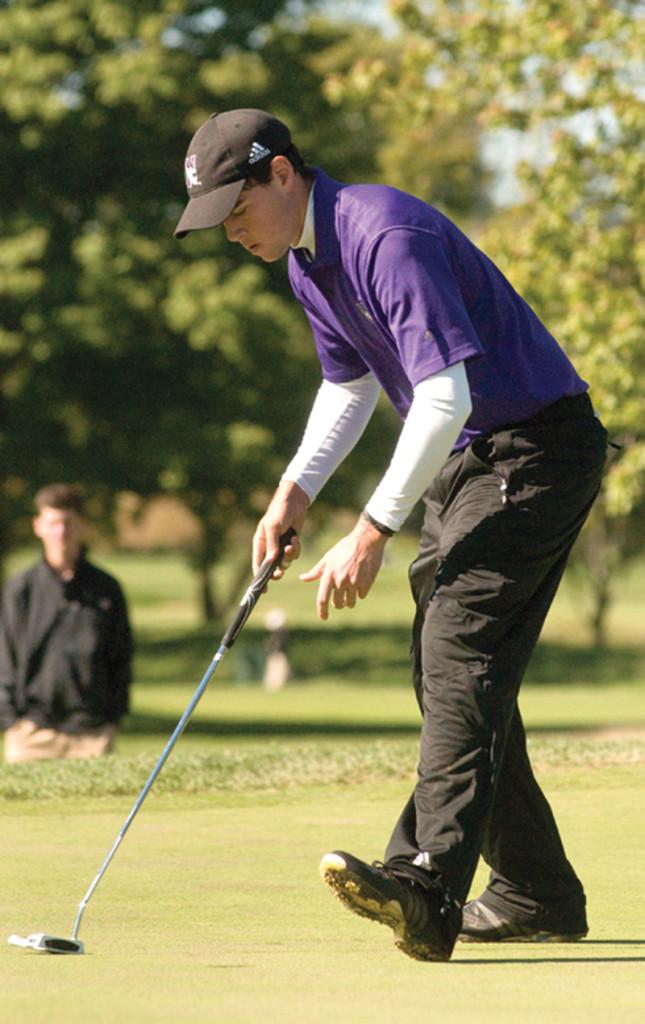 Bennett Lavin was one of several Cats to produce uneven results at the Erin Hills Intercollegiate. Though senior Jack Perry and freshman Matt Fitzpatrick were uncharacteristically inconsistent, the Cats claimed 5th place at the event.

The Wildcats took home fifth place at the Erin Hills Intercollegiate despite some misfortunes from their top two players.

Senior Jack Perry triple-bogeyed the par-4 15th in the opening round to end Sunday at 4-over par, the lone score not counted for Northwestern. Freshman Matt Fitzpatrick carded five bogeys in a seven-hole stretch in the final round Tuesday, but a late birdie helped him get back on track, even though he eventually shot a 76 and was the only NU player whose score counted on the final day to shoot over par.

“There’s a lot of progress,” coach Pat Goss said. “I’m impressed with a lot of the things we’re doing. We’re just missing in getting the entire picture.”

NU was tied for fourth after the opening day, but the tournament seemed to be slipping away from the Cats after a score of 9-over on the front nine Monday. However, NU made a run at the leader board, finishing at 5-under par to remain tied for fourth after day two. The momentum carried over into the front nine of the final day, when the team shot 1-under for the opening nine. The Cats followed that up with a 1-under finish on the last nine holes to end the tournament at 2-over par.

The biggest story of the tournament may have been the re-emergence of Josh Jamieson after a difficult start to the year. The sophomore’s tournament could be broken up cleanly into two 27-hole stretches with vastly different results. In his first 27 holes, Jamieson shot 7-over with one birdie, five bogeys and a triple. However, he turned on the jets in his final 27 holes with eight birdies and two bogeys to finish the tournament at 1-over par, good for a tie for 13th.

“(Tuesday’s) round was a direct reflection from that back nine (on Monday),” Goss said. “It’s the best he’s responded to adversity. It was such a great example of him breaking down.”

Jamieson’s success and relative consistency did not transfer to most of his teammates. Perry’s poor score could be attributed to his triple bogey, but others had larger problems. Junior Matthew Negri shot even par the first day and 2-under the last day but had an ugly 80 in the middle. Bennett Lavin shot an even-par 72 on the opening day, but the junior had as many double-bogeys or worse as birdies over the final 36 holes to finish at 11-over par for the tournament. Fitzpatrick’s misfortunes on the last 18 holes may have been most disappointing. The freshman had only four bogeys in the first 36 holes but made four straight to start the back-nine Tuesday to derail his round.

There will be very little rest for the Cats, who jump back into action Saturday and Sunday in North Carolina. It is the shortest layoff NU has had since 2011, when the team played two tournaments with only two days of non-tournament action at the beginning of the season.

Goss said he is not worried about the quick turnaround because of how well the team played this week.

“When you can do as many good things as we did, it’s easy to keep it going,” Goss said. “We have a lot of positive momentum to go and feed off of at Duke. If we had struggled this week, it would have been a different story.”