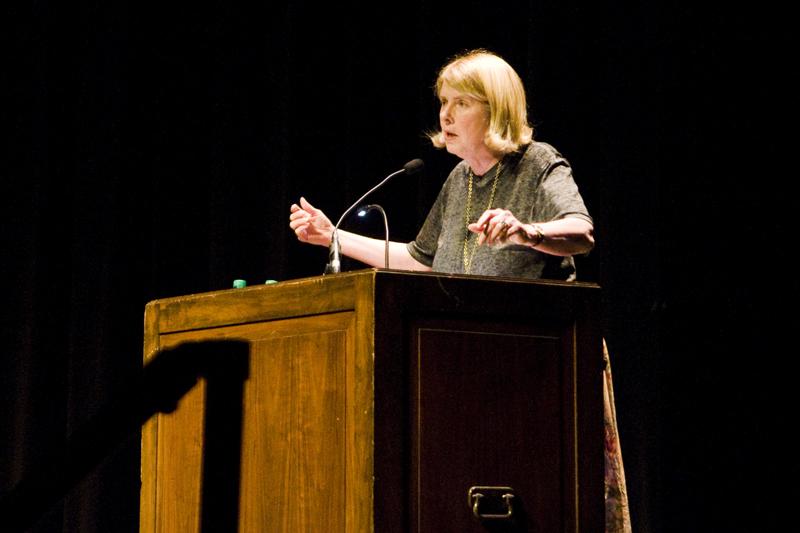 Johns Hopkins University Prof. Kay Redfield Jamison speaks Monday at Cahn Auditorium. Jamison talked to a crowd made up of primarily Panhellenic Association women about her experience with bipolar disorder.

Kay Redfield Jamison shared with members of the Northwestern community Monday her thoughts on the progress that has been made in treating mood disorders and her personal struggles with bipolar disorder.

Jamison, who is most well known for her New York Times best selling book “An Unquiet Mind,” is a professor at Johns Hopkins University School of Medicine and was chosen by Time magazine as a “Hero of Medicine.” The discussion is part of an ongoing conversation about mental health on NU’s campus and followed a new Wildcat Welcome program dedicated to the issue.

Monday’s event attracted nearly 1,000 students, mostly women, to Cahn Auditorium. Although the event was open to the entire NU community, attendance was required for members of Panhellenic Association’s sorority chapters.

Jamison said there are serious problems with mental health issues on college and high school campuses around the world. But she added that medical advances in developing treatments have allowed students with mental health disorders, who may not have previously had a sufficient support system to attend college, to pursue higher education. In turn, she said, there has been a huge increase in demand for student-health facilities on college campuses.

Jamison went on to describe her personal struggle with bipolar disorder, explaining how she attempted to disguise her mania and depression from her friends and later her colleagues and superiors.

“No one noticed that I was in any way different,” Jamison said. “I had no idea how I managed to pass as normal in high school, except that other people are generally caught up in their own lives and seldom notice the despair in others if those despairing make an effort to disguise their pain.”

During the Q-and-A portion, Jamison spotlighted Harvard’s improvement in mental health services as an example of the important role universities play in advocating for students.

Psychology Prof. Renee Engeln, who organized the event, said hearing from students who had read Jamison’s book opened her eyes to the impact Jamison could have as a speaker.

“I’ve just been hearing for years how meaningful people found that book, and so I just thought she would be a great person to have come because of that,” Engeln said.

Engeln said the award of an academic enrichment grant from The Alumnae of Northwestern University allowed the psychology department to bring Jamison to campus. Additional support for the event came from Counseling and Psychological Services and PHA.

She said she has wanted to bring Jamison to NU for a while because many students have been worried about the lack of mental health resources on campus.

“(Jamison is) very open about her own struggles, which is part of why I really wanted her to come,” Engeln said. “I think that can be inspiring for a lot of students — that they’ll see that and realize you don’t necessarily have to have a lot of limits put on your life if you are struggling with depression or are bipolar.”

Correction: A previous version of this article misidentified the source of the enrichment grant. The Daily regrets the error.