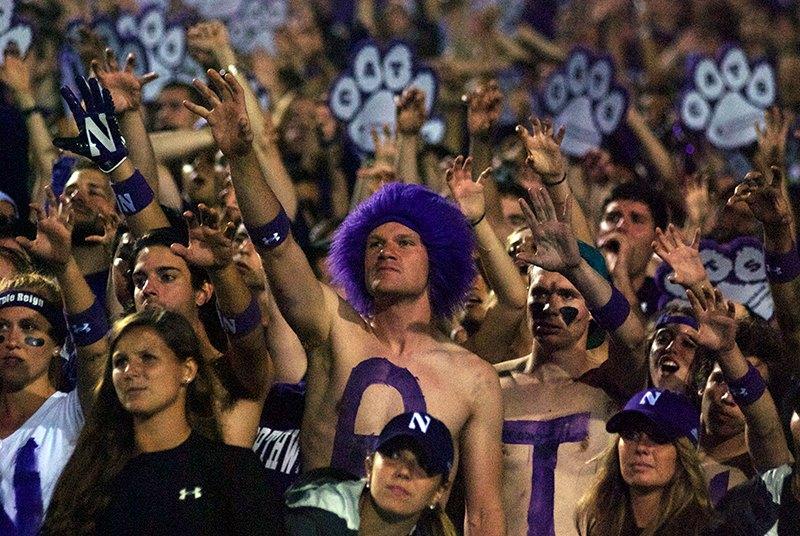 Northwestern fans cheer during Saturday's game against Ohio State. The Daily hopes the student section will continue to show support now that the national spotlight has turned off.

On Saturday, our Wildcats stepped on to Ryan Field to cheers from a sold-out stadium — including a student section filled beyond its 5,000-person capacity. Even before the gates opened for ESPN’s “College GameDay” early Saturday morning to well after the game ended that night, Northwestern displayed unprecedented unity and school spirit.

The level of pride shown by students and alumni alike was a welcome surprise. It would be a challenge to find many students who didn’t make a memory Saturday. Yet The Daily worries about what will happen going forward, when our next game won’t be the top-billed matchup in the nation, when the ESPN camera is gone, when millions of television viewers turn to a new team for a night.

Finding joy in a winning athletic department and cherishing that experience is not atypical. And after more than half the student body turned out for the Homecoming game, that is clear. However, the team that stepped out of the mouth of a gigantic Wildcat on Saturday is not fundamentally different or drastically better than the team that played in the last two years. Before the game’s stellar play and tough loss, NU held the fourth-longest win streak in college football. Last year we won 10 games, including the Gator Bowl. The Cats have shown week in and week out that not only do they deserve the same recognition as any other top-tier football team, but also equal fan appreciation and attendance. This weekend reinforced the reason students deck out in purple each week and served as a wake-up call to those who are just now realizing why.

Coach Pat Fitzgerald and our incredibly talented student-athletes showed long ago that they are not like past teams, but to many the stigma remains. Students often make jokes about our sports teams being bad, even when it’s not true. The sea of Ohio State fans at Saturday’s game suggests that plenty of NU season ticket holders sold their seats to the opposing side, allowing chairs outside the student section to bleed red rather than purple. NU could go on to win the Big Ten Championship, but if students and alumni remain committed to believing our program is subpar, our turnout and pride will continue to be just that. The team rarely complains publicly about low attendance at each home game, but that doesn’t mean we shouldn’t lend it greater support.

Both the bowl victory and the immense amount of national coverage have done wonders in uniting NU behind our players and fostering the spirited atmosphere present at other schools with huge athletic programs. We urge that support to continue.

The NU-Ohio State matchup is one that students will remember fondly well after graduation. Even after the disappointing loss — as the Cats returned into the tunnel with their heads a little lower — students remained standing, cheering for what the team had accomplished. It would be easy to just take the loss and forget about the three home games left in the season. It would be easy to return to the status quo, leaving the stadium as halftime begins with many seats in the student section empty. That wasn’t the case by any means on Saturday, and it shouldn’t be moving forward. If you didn’t make it to the game this weekend, there’s still time to throw on purple and head out to Ryan Field.

Saturday night and early Sunday morning, social media was overflowing with sentiments from fans reflecting on the game, some calling it the proudest moment of their NU experience.

With a program like ours, there’s no reason why we can’t bring the same overwhelming spirit to the rest of the season.