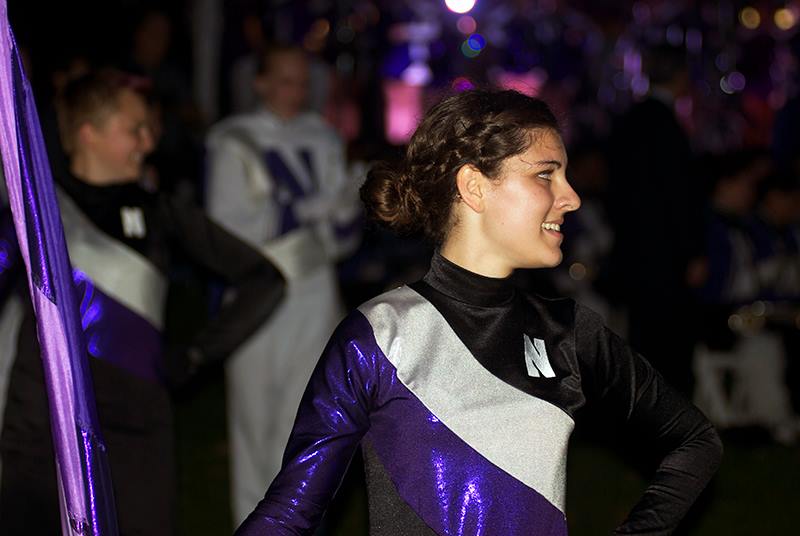 Homecoming Week ended Friday with the annual parade, with students and alumni traveling down Sheridan Road, cheering on floats from campus and city organizations.

From Lincoln Street down to The Arch, groups from sororities to kazoo marching bands supported Northwestern athletics in their own way. Nearly 40 floats participated in the parade.

As night fell and chants of “Go U! NU!” streamed through campus, members of the community applauded representatives of the school — most prominently grand marshal Mike Greenberg (Medill ’89) and University President Morton Schapiro, both of whom traveled at the front of the parade. Schapiro was first, riding in a convertible with his wife, daughter and two dogs. Next came Greenberg, who waved left and right to Wildcat fans. Mayor Elizabeth Tisdahl also rode on a float to represent Evanston.

The parade and the subsequent pep rally on Deering Meadow were the culmination of a long day for some NU students. At 5 a.m. Saturday, “Mike & Mike” — an ESPN sports talk radio featuring Greenberg — broadcast from Deering Meadow.

Schapiro was greeted with a “Morty!” chant as he took the stage. He showed his excitement about the game, saying, “This is about football. Enjoy yourself, be proud, be loud, wear purple, go Cats!”

Fitzgerald was profuse in his thanks of the students and alumni.

“We couldn’t have been able to do any of this without you,” he said.

In his role as grand marshal, Greenberg also gave the fans in attendance a pep talk.

“It was incredible,” the Weinberg senior said. “I had never seen Deering that full before. I don’t think there had ever been that many people at a Homecoming pep rally before.”

This year’s Homecoming theme was “NU ‘Cats on the Block,” which celebrated the 1990s, and campus groups decorated their own posters incorporating that theme.

The combined float of Alpha Epsilon Pi and Delta Zeta displayed a variation of the title card of the children’s television show “CatDog” — with the cat’s head transformed into a Wildcat with Ohio State mascot Brutus Buckeye in its mouth.

Male members of the Chi Omega and Lamda Chi Alpha team dressed in white and sang songs from popular boy bands like *NSYNC.

The parade has been a part of NU’s Homecoming celebrations since the early 20th century, and the most recent iteration embraced tradition. In addition to a performance by the NU Marching Band, the NUMBALUMS — the band’s alumni group — played the fight song as it proceeded south down Sheridan Road.

In a call to arms directed at the scores of alumni and current students at the pep rally, Greenberg said four words: “This is our time.”