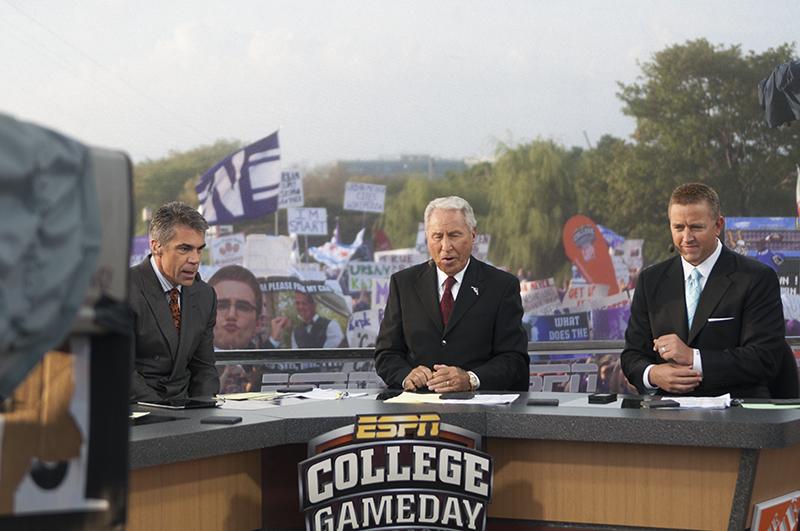 “These hardcores have waited their whole lives for a game like this, a program that in decades past was laughed at, picked on, put down, pushed around,” Fowler said. “It’s revenge of the nerds these days.”

ESPN’s college football preview show, which airs every Saturday from the location of the week’s top game, set up last week on the Lakefill, ahead of the Wildcats’ Saturday night matchup against Ohio State. The show’s visit marked its first time in Evanston since NU faced Iowa in 1995, although it also broadcast from Wrigley Field in 2010 when the Cats took on Illinois.

With signs ranging from irreverent (“Kanye named his baby after us”) to academic (“Urban Meyer cites Wikipedia”) to slightly vulgar (“our endowment is bigger than yours”), students packed the pit behind the show’s set well before the sun rose over Lake Michigan. Some students arrived at the Lakefill as early as 6 p.m. Friday.

At the end of the show, ESPN analyst Lee Corso correctly predicted Ohio State as the eventual victor by donning the head of Brutus Buckeye, garnering loud boos from the NU crowd. Brent Musburger (Medill ’62) was featured as the show’s guest picker, coming out in a custom purple No. 5 jersey.

A who’s who of NU names visited the “GameDay” set. University President Morton Schapiro and athletic director Jim Phillips chatted with guests. Football coach Pat Fitzgerald was interviewed on the show and Mike Greenberg (Medill ’89) and Mike Wilbon (Medill ’80) offered their picks at the end of the broadcast. Both alumni predicted one-point NU victories.

Although scattered rain and thunderstorms were forecast throughout the morning, the weather cooperated, keeping everyone in attendance dry — except NU’s men’s swimming and diving team, which took a dip in Lake Michigan. The last time the show visited Evanston, a blizzard forced the broadcast to air from Welsh-Ryan Arena.

Although NU’s loss Saturday night took some of the luster off the weekend, Weinberg sophomore Kevin Harris said he thought the “GameDay” broadcast and the Cats’ close battle with the Buckeyes still showed off the athletic department’s rise.

“Even talking to actual analysts after the show, I think it finally hit that Northwestern football definitely has gained that national respect,” Harris said. “Even if the entire country hasn’t realized it, the analysts and the people who know what they’re talking about realize that Northwestern is for real in football.”

Harris was selected as the Home Depot Social Host for the show’s visit to NU. Harris won the position by receiving the most RSVPs on a Facebook event. His responsibilities began Thursday and continued through Saturday morning, when he received a backstage pass and met the stars and visitors of “GameDay.”

“We got to roll in at 7 o’clock instead of having to wake up at 3:30 or anything like all our friends did,” he said.

At a news conference Friday, “GameDay” producer Lee Fitting said NU was viewed as a potential destination for months. The decision was finalized Sept. 28 after Ohio State knocked off Wisconsin, guaranteeing a matchup of undefeated teams.

Fowler said at the news conference that unlike in 2010, when the Wrigley game was featured, Saturday’s show was all about NU.

“This is just regular old ‘GameDay,’ no novelty, just a place we haven’t been in most of the students’ lifetime, but that makes it great,” he said. “That energizes us when it’s been a long time since we’ve been at a place.”