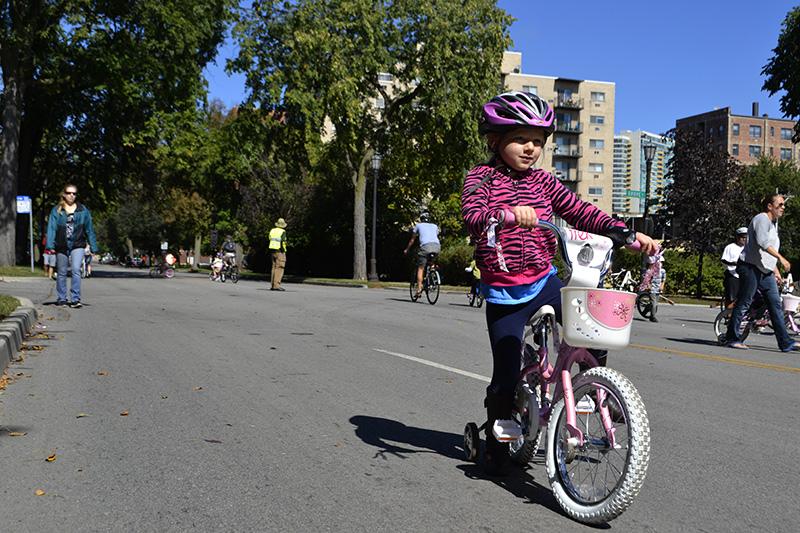 A young girl rides down Ridge Avenue during Bike the Ridge. The annual event was held on Sunday between 9 a.m. and 1 p.m. and attracted many families.

Evanston shut down a two-mile stretch of Ridge Avenue on Sunday for hundreds of residents participating in the annual Bike the Ridge ride.

The event, held from 9 a.m. to 1 p.m., attracted cyclists of all ages, as well as rollerbladers, skateboarders, runners and scooter riders. They took over all lanes on Ridge Avenue between Howard and Church streets.

“It’s just a really great Evanston event,” said Michael Miro, spokesman for the Ridgeville Park District. “It brings families out of their homes on a Sunday morning.”

The park district was one of several sponsors of the cycling event, which also featured musical performances and food trucks at Ridgeville Park near the intersection of Howard Street and South Boulevard.

Although the ride did not officially begin until 9 a.m., bikers were already on the route at 8:45 a.m. Some cross streets remained open with the assistance of traffic supervisors, but other intersections were closed for the event.

Evanston resident Richele Escobar came with her 6-year-old son Julian Pamaran and her husband, who she said “try to ride as much as (they) can.” Her family aims to attend the event every year, she said.

“You know, (my son) gets excited, he sees his classmates, his friends from school,” Escobar said.

There were also a few complimentary food and water stands, including a table with bananas and coffee near the intersection of Howard Street and Ridge Avenue. Children could also decorate their bikes with ribbons offered by one stand along the route.