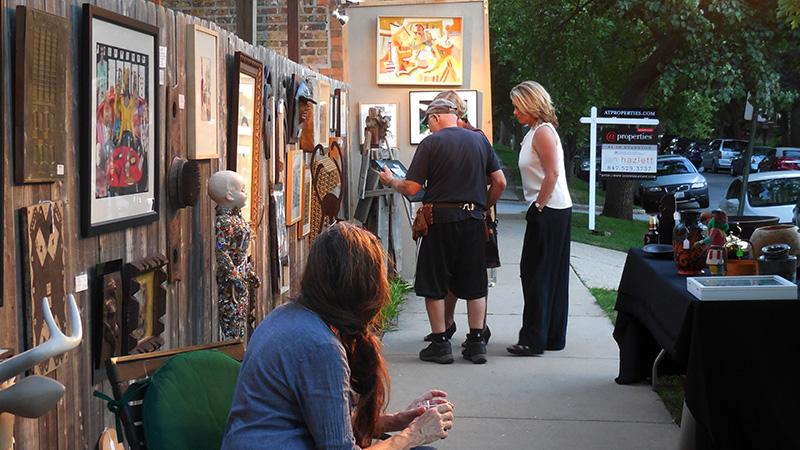 Evanston artists organized a free showcase in the city’s West Village on Friday,  giving residents a glimpse of new galleries and open studios.

Lea Pinsky, one of the event’s organizers, said she hopes the Art Hop will be at least biannual.

“This is the second one we’re doing,” Pinsky said. “I’m really excited about the community-building aspect of it.”

Space 900, where Pinsky shows her art, was one of many galleries and studios in the area that opened up for the night.

More than 12 organizations joined in the second event of its kind to feature open studios, gallery exhibitions, a craft beer tasting, a variety of demos, an open mic and a live jazz jam. The first Art Hop was in June.

A few blocks away, Ausrine Kerr will rent out Art Room, a gallery space on Florence Avenue, to artists to create their own shows or to employ the workspace. Fran Joy, a member of the Evanston Arts Council, said renting the Art Room space out to artists is “really commendable.”

“This place is such an asset to anyone who’s in Evanston,” Chinamasta said.

“I didn’t know we had such an art community in this area,” said Hugh Gilbert, who lived with his wife in Evanston for 23 years.

He attended the printmaking demo at The Evanston Print and Paper Shop, located next to Ausrine’s Art Room, and called it “just charming.”

“We’re thrilled to have artists and craftsmen that have moved into this storefront,” said Joe Feinglass, a Feinberg professor who lives around the corner from the print shop. “I’m happy to have them here.”