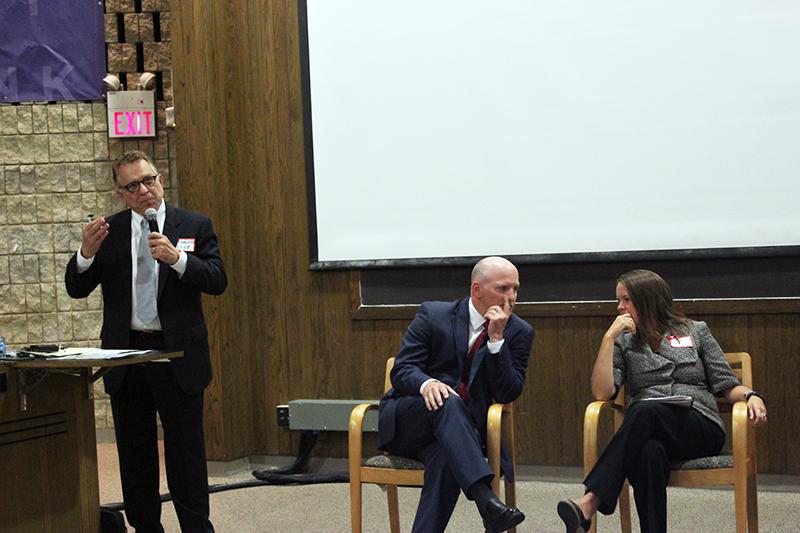 As Shannon Watts began to speak Thursday night about the Sandy Hook Elementary School shooting, her voice cracked and her eyes filled with tears.

The Indiana woman described how furious she was to hear the news, especially as a mother of five children. On Dec. 14, 2012, she took to Facebook to tell her small following of 175 friends that she had had enough of gun violence. Soon, her posts had thousands of “likes,” and she became the founder of Moms Demand Action for Gun Sense in America.

In the past nine months, the organization has expanded to all 50 states and gained a following of mothers who have demonstrated with strollers and phoned politicians to adapt gun control legislation. On Thursday night at the Owen L. Coon Forum benefiting the organization, Watts spoke along with author and lawyer Tom Diaz, state Sen. Dan Kotoski, state Sen. Kwame Raoul and Colleen Daley, director of the Illinois Council against Handgun Violence. Rep. Jan Schakowsky (D-Evanston) was slated to speak in the panel, but she was unable to leave Washington, D.C.

Jancy Jerome, president of the Evanston Township High School Booster Club, helped organize the event with a group of other women who she said were fed up with gun violence in Evanston, citing fatal shootings near ETHS.

“I said, ‘We make things happen every damn day in this town, let’s make this happen,'” she said.

The politicians and activists called on the audience of about 300 people to take a stand by spreading the word among family and friends and lobbying their elected representatives. Moderated by Kotoski, the event kicked off with a presentation on the basics of firearms from Diaz. Watts followed with a passionate appeal to the mothers in the crowd.

“I do not want to live in a country where I’m sending my kids to school in bulletproof backpacks,” she said.

Raoul spoke about the challenges of passing gun control in Illinois, calling the state “regionally divided” on the issue.

He urged the attendees to reach out to gun owners who are supportive of gun control. He also encouraged the Chicago-area residents to think about what their communities could do to prevent a shooter from ever firing a gun in the first place.

Carolyn Murray, whose 19-year-old son Justin was slain in a November 2012 shooting, attended Thursday’s event, sitting with a group of Chicago-area residents who had lost family members to gun violence. Although she thought the forum’s message to advocate for state and national legislation was good, Murray said Evanston residents still need to “wake up” and realize how guns have affected the city.

“When it happened to me, I do realize that it could happen to anyone,” Murray said. “The disconnect that we tend to feel in Evanston because we’re not Chicago is not a good way to view gun violence overall.”