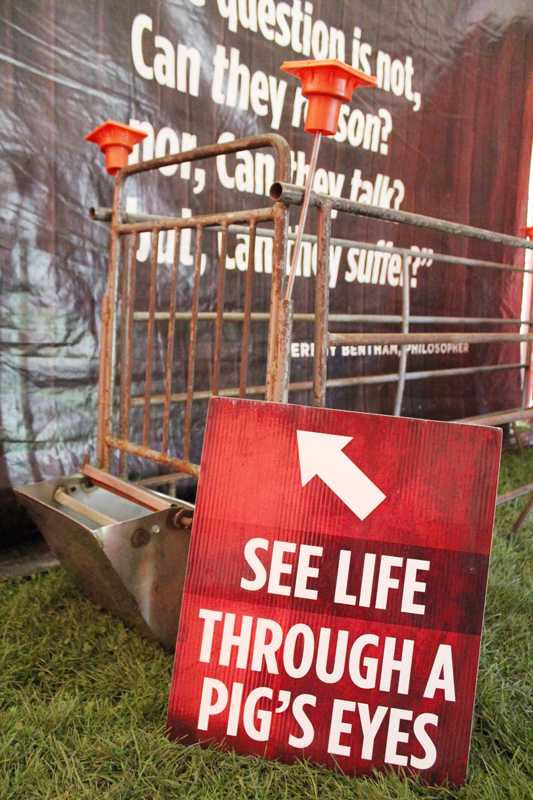 Members of the youth division of PETA, peta2, set up an imitation factory farm on Norris East Lawn on Wednesday. Volunteers said they hoped the exhibit would influence students to go vegan.

Members of People for the Ethical Treatment of Animals’ youth division, peta2, set up an imitation factory farm Wednesday on the Norris East Lawn to try to convince students to go vegan.

The “Glass Walls” exhibit took place inside a 20-by-30 foot tent, where people could confine themselves to sow gestation crates — an area so small a pregnant pig cannot take two steps. Inside, students watched peta2’s documentary, “Glass Walls,” which spotlights factory farms.

When people reached the end of the exhibit, they received samples of vegan cookies, meatless jerky, “cruelty-free” recipes and tips for going vegan.

Weinberg sophomore Bethany Mueller said she only went into the tent to pick up a flyer for her roommate, who is a vegetarian.

“I thought the tent was incredibly graphic, and I wished there was something more proactive that I could do after seeing those images, rather than just walking through the tent feeling horrified,” Mueller said.

Before she saw the exhibit, Mueller was not a vegetarian.

“It’s just not something I have ever really felt strongly about,” she said.

Now, she said she is eager to try the “cruelty-free” recipes from PETA and avoid buying her meat from factory farms. However, she said she would want to know all of the health benefits and risks before becoming a vegetarian.

“I have to admit I will not be eating a burger or anything like that in the next couple months,” she said.