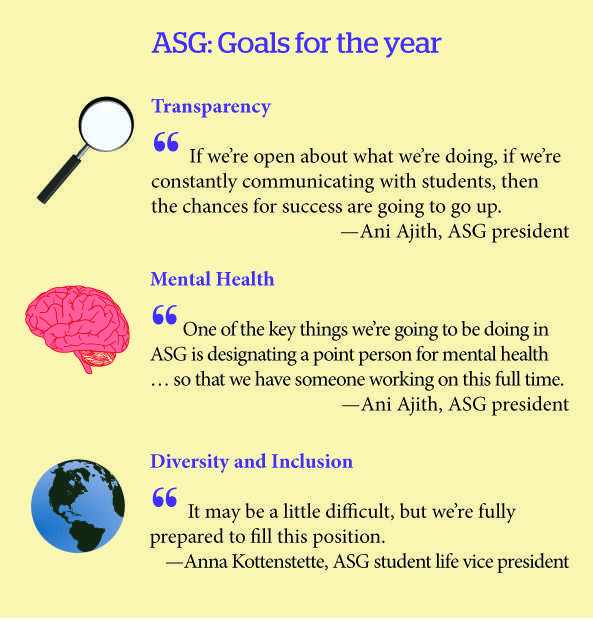 As Associated Student Government works to recruit new students for the year, officers say transparency, mental health and diversity and inclusion will be the organization’s main areas of focus.

“At the beginning of the year, it’s a little crazy,” said Anna Kottenstette, student life vice president. “We’re all trying to revamp our committees, trying to make sure we’re set with a proper cross section of campus to provide the best possible feedback.”

“It’s a tool we’re going to use to help our projects succeed,” the Weinberg senior said. “If we’re open about what we’re doing, if we’re constantly communicating with students, then the chances for success are going to go up.

ASG plans to roll out a pilot program called the “Playbook” that will track progress in ASG committees through Google Drive and will be accessible to students. The Playbook will allow students to monitor and understand ASG’s progress on its projects and initiatives, Ajith said.

“ASG’s transparency is going to be a huge focus. … There are no state secrets,” he said. “We can be very, very open about what we’re doing.”

Ajith said that although he is pleased with the administration’s mental health efforts so far —including the newly introduced mental health Essential NU and increased staffing at Counseling and Psychological Services — he would like to see more progress.

“What’s the best way to talk to someone about stress when they’re already so stressed out and pressed for time that they can’t make it to the stress session?” Ajith said. “One of the key things we’re going to be doing in ASG is designating a point person for mental health … so that we have someone working on this full time.”

Kottenstette, a Communication senior, said she wants to see regular programming from CAPS in Norris University Center, as well as progress toward making Norris a more “calming space.”

“I would really love to see a relaxation room at Norris,” she said.

After two attempts to fill the position last year failed, one of the first items on ASG’s agenda for the year will be confirming an associate vice president for diversity and inclusion, Ajith said.

“It may be a little difficult, but we’re fully prepared,” Kottenstette said. “That’s something that’s going to be really important this year, finding someone who has a good sense of the campus culture at Northwestern and has a good idea of how they would like to see diversity and inclusion work within ASG and within Northwestern as a greater community.”

Additionally, ASG officials are discussing the recent changes to dining hall hours in response to negative student feedback, Ajith said. The changes, including early closures at Willie’s Food Court, took effect at the start of this academic year.

“We’re working with the administration right now to extend some hours to make sure that Subway is an option for students later,” Kottenstette said. “It is our goal to provide students with the best possible services. … When we started hearing that people are upset that Norris dining is closing at 3 p.m., obviously that was something that we’re really receptive to, and that shouldn’t be happening.”