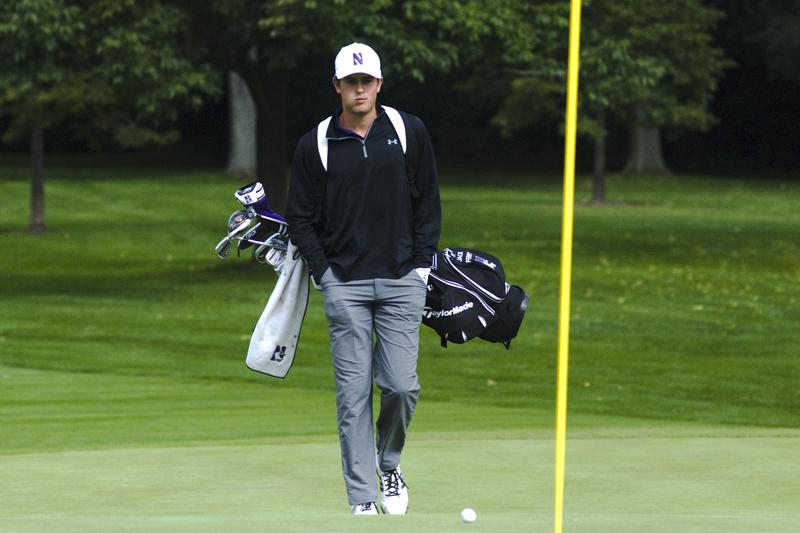 Senior Jack Perry shot an even par 70 in Monday’s third round to finish in second place at the Windon Memorial. Perry was an All-American last season after leading the Big Ten with a 71.61 scoring average in the regular season last year.

Northwestern started at the bottom, and now it has arrived.

A week after finishing in last place in the Fighting Illini Invitational, the Wildcats shot even par in the final round of the Windon Memorial to take home the trophy at their own event for the first time since 2007. Coach Pat Goss credited the victory to NU’s ability to adequately prepare for the tournament, unlike last week at Olympia Fields North Course.

“We played Olympia Fields without enough days of preparation,” Goss said. “We just needed to get home, circle the wagons, work on the right things (and) build our confidence.”

The tournament was the first indication that Goss’ plan for the team may actually come to fruition. Senior Jack Perry shot a 2-under 70 in Monday’s final round to card a score of 5-under and finish the event in second place. Freshman Matt Fitzpatrick cooled down after an opening round 66 on Sunday morning but still shot a 70 Monday to secure a tie for third.

It takes more than two players to win a golf tournament, and the Cats’ supporting players shot well enough to keep NU in the hunt at the Knollwood Club. Junior Bennett Lavin shot a 71 in both Sunday’s rounds to be the ideal third-score added to Fitzpatrick’s and Perry’s. Sophomore Josh Jamieson overcame an illness to shoot a 73 Monday, the third best round of the day for the Cats. Junior Matthew Negri never managed to shoot under par in the event, but his 73 and 74 on Sunday were enough to keep NU three strokes back entering the third and final round Monday.

Perry’s runner-up finish comes in the wake of one of the worst tournaments during his four years in Evanston. The All-American finished in last place at Olympia Fields with a score of 26-over par, including a 12-over 82 in the event’s final round. Perry did not shoot over par in any round this weekend and only had six bogeys through 54 holes compared to 11 birdies.

The dramatic change in results stemmed from an improved mentality from the senior. Perry said he tried to play with more confidence this week and made the conscious decision to control his movements.

“I got a little more swagger and a little bit more pep in my step,” he said. “I just decided I’m going to take control of my thought and my ball. I did a good job at picking really smart targets, picking conservative targets and swinging aggressively and I did that pretty well.”

Fitzpatrick also struggled last week, but most of those issues had to do with his hectic summer schedule, which he said did not give him much time to rest. With a full week in Evanston and some distractions thanks to Wildcat Welcome, he was able to work on his mistakes with some help from his coaches in England.

“The biggest thing that helped me was my coach at home,” Fitzpatrick said. “I know what he told me straight away, I’ve done it before and that certainly fixed it. I had a bit of time to practice it before this weekend, but it was nice for it to pay off straight away.”

The Cats will take two weeks off to begin school before heading to Wisconsin to play the Erin Hills Intercollegiate from Oct. 6-8.