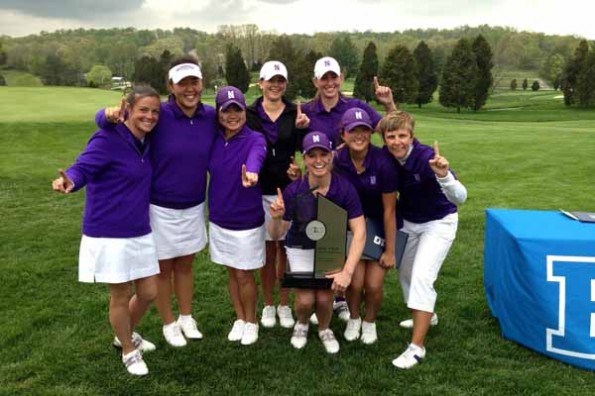 Northwestern learned the hard way that one bad round can prove very costly last week.

The Wildcats placed fourth at the Dick McGuire Invitational, finishing six strokes out of third place and 4 shots ahead of fifth. However, the inconsistency of the team’s best players was hard to overcome. Junior Hana Lee shot rounds of 2-under and 3-under sandwiched around an ugly 4-over 77 in the second round.

“It’s hard to imagine Hana playing that golf course and not making any birdies,” coach Emily Fletcher said. “She had a lot of chances in the afternoon, but she just didn’t convert. Her ball-striking was good.”

The conditions were a bit abnormal for Albuquerque, N.M., with the rough being more unruly than usual thanks to some unseasonable rain. Fletcher said the rough was particularly difficult around the greens, which led to some of the fluctuations in scoring.

“It’s a golf course where you can make some birdies,” Fletcher said. “The rough around the greens was very penal. We struggled a bit early on, but I was pleased how well we were able to play on the last nine holes (on the course).”

Lee’s tournament began well, carding four birdies en route a team-best 71 Friday morning, despite a double-bogey. However, in the afternoon round, Lee did not sink a birdie, and two bogeys and a double outshone her 14 pars as she fell to 2-over for the tournament. She responded with five birdies Saturday morning on the way to a 69 to finish one-under for the tournament and in a tie for seventh in the individual standings.

Kaitlin Park was the best player for the Cats last weekend, but the sophomore’s momentum did not carry over to Friday. The reigning Big Ten Freshman of the Year had only a single birdie to offset six bogeys in the opening round. Park’s other two rounds were markedly better, as she carded a 74 and 72 to finish the tournament 5-over par, fourth-best on the five-golfer team.

NU took great advantage of the par-5, 466-yard ninth hole throughout the entire tournament. Despite a blind tee shot, the Cats shot 6-under-par, which included two eagles during the 15 times the team played the hole. Freshman Kacie Komoto may have fared the best on the hole, hitting the flagstick in the opening two rounds to secure a tap-in birdie in the morning and tap-in eagle in the afternoon.

The team now returns home, where it gets a week off before hosting the Windy City Collegiate Classic in Highland Park on Sept. 30 and Oct. 1. Fletcher said she thinks the team will respond to being at home for the first time this year.

“They’ll come into it with some confidence,” the coach said. “We have an elite field coming with some of the best teams in the country. It will be a good test.”