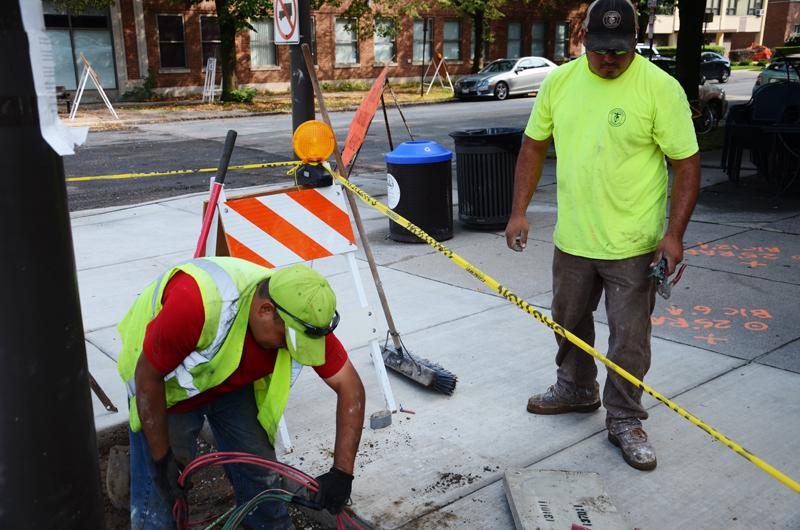 Oscar Gutierrez (left) and Julio Gasca add wiring to a lamp post on the corner of Davis Street and Oak Avenue. Gasca said the city will use the wiring for festival lighting.

Construction workers are more than halfway done with renovations on Davis Street that some businesses say has made it more difficult to attract customers.

The upgrades, which began last spring, work toward six main goals and has left the street without regular parking and only one lane of traffic, senior project manager Sat Nagar said.

The city is in the process of replacing sewer lines, renewing the streetscape and adding a new gas line, water main, bike lane and concrete parking lot, Nagar said.

“Once it’s all complete, for the next 20 years, no one has to do anything on the street level,” he said. “Underground work will be good for 60 to 70 years.”

Nagar said the city has tried to inform citizens and businesses of changes in parking.

“We try to maintain access to businesses during construction,” he said. “But we have to maintain one lane of traffic.”

During construction, the city restricted parking along Davis Street with temporary traffic signs, though overnight parking from 5 p.m. to 7 a.m. is still permitted on one side of the street. As a result, some businesses like T-Top Nails, 1114 Davis St., face problems getting customers to their store.

Jennifer Tran, an employee at the salon, said because parking is limited along Davis Street, she has seen a drop in customers.

Although the city posted a parking guide on Downtown Evanston’s website, Tran said it was not enough to help attract customers. She said the middle of the week usually brings a lot of people to the salon, but she only saw five Wednesday.

“Construction is very slow for businesses,” she said. “At first (customers) used to come later, but now they don’t come at all.”

However, not all businesses are frustrated with the construction. Avail & Company, a few doors down from T-Top Nails, has seen little change since construction started, said Ted Alvia, co-owner of the bridal shop, 1106 Davis St.

“We’re a destination, so for customers it’s a little more challenging for parking,” he said. “But it hasn’t affected us in particular.”

“It takes time, but we appreciate the patience the businesses have had during this time,” Nagar said.