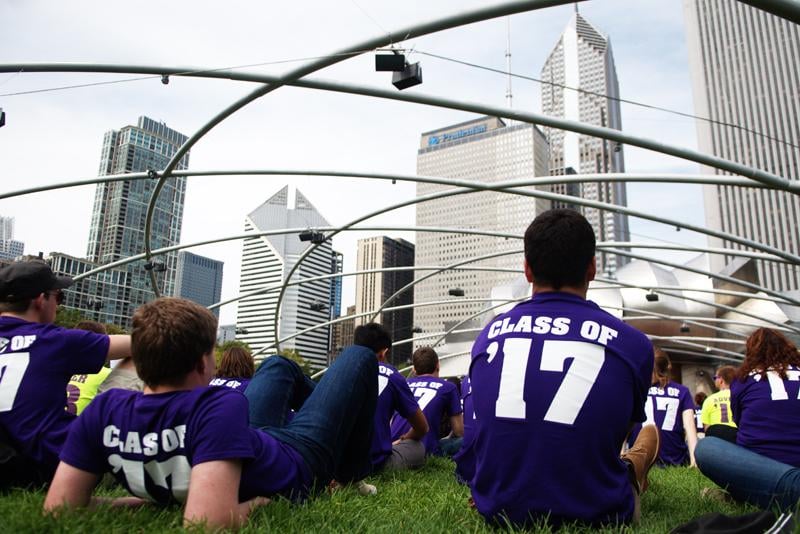 New students sit on The Great Lawn at Millennium Park on the second day of Wildcat Welcome. The event, Purple Pride, was one of several new activities introduced this year.

After integrating several changes to the orientation program for the class of 2017 and transfers, Wildcat Welcome wrapped up Monday.

Purple Pride was held at Chicago’s Jay Pritzker Pavilion from noon to 6 p.m. New students participated in icebreakers, visited Cloud Gate (otherwise known as “The Bean”), learned the Northwestern fight song and practiced their class dance to One Direction’s “Best Song Ever.”

The Office of New Student and Family Programs announced the Chicago trip in April as a replacement for Serving Communities and Promoting Engagement, a freshman service-project day known as SCAPE. The outing to Millennium Park was designed to connect students to Chicago and build a strong sense of community, said Josh McKenzie, director of the first year experience.

“Purple Pride was really … our step forward in making sure we were highlighting what Northwestern actually is in a new and exciting way,” McKenzie said.

Overall, McKenzie said, the event was successful, but his office is still waiting to get student feedback.

Medill freshman Aditi Bhandari, an international student from India, said she appreciated the chance to get to know Chicago.

“I was always super excited to see Chicago because it’s a huge city and it’s got awesome opportunities,” she said. “I never realized that we would have an opportunity to see the city so early on. Nothing really prepared me for the enormity of what the Board of Directors had actually planned for us.”

The class of 2017 and transfer students traveled to Welsh-Ryan Arena on Sunday for the ENU on mental health. The featured speaker, Jordan Burnham of Active Minds’ Speakers Bureau, shared his story of struggling with depression and a subsequent suicide attempt and urged students to talk about mental illness.

“Burnham was able to talk about depression and suicide and mental health with such ease,” said Communication junior Daphna Weinstock, a second-year peer adviser. “He was the purest example of talking openly about mental health.”

Select PA groups also are participating in a new program, IGNITE, where PAs will offer additional guidance and meeting times for their advisees throughout the year. The initiative will likely be extended to all students in the future if current participants find it beneficial, McKenzie said.

The week concluded Monday morning with the President’s Convocation, where University President Morton Schapiro offered advice to new students. Schapiro urged them to be patient in meeting friends or future spouses and finding a place within the NU community. College is a transition, he emphasized, that will take time to complete.