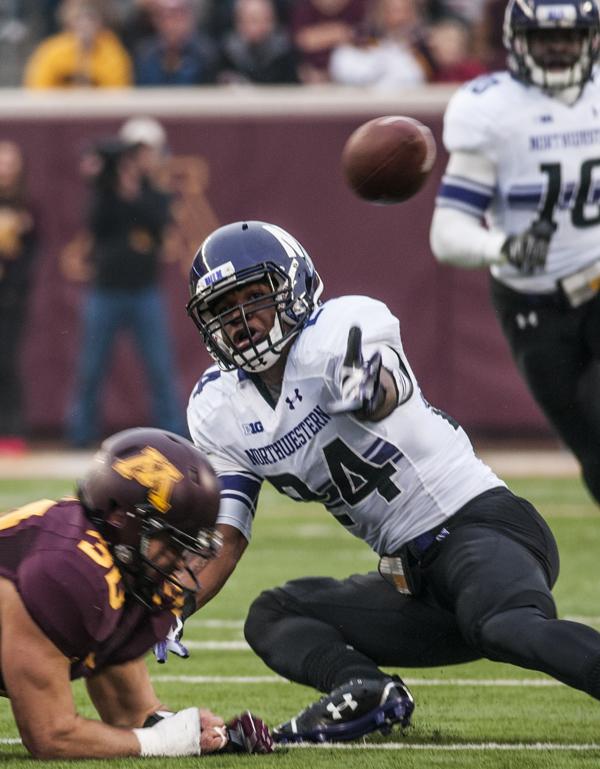 Ibraheim Campbell finds himself as one of Northwestern’s new playmakers and leaders in his junior year. The experienced safety said many freshmen now look to him for answers and communication.

Having a successful defense requires an immense amount of communication and chatter among the group.

“Having everyone on the same page is crucial,” Campbell said. “It’s something I realized early on in my career.”

The Philadelphia native was an extraordinary athlete coming out of high school. He played running back and defensive back for Chestnut Hill Academy and was named to the Philadelphia Daily News’ All-Decade team. Campbell has continued his ball-hawking ways in Evanston. He now has an interception in five straight games dating back to last season. Fitzgerald said Campbell’s experience on offense has helped him make plays on the ball in coverage.

“He’s got terrific ball skills,” Fitzgerald said. “That’s somewhat of a lost art in secondary play. … He’s got a great knack of tracking the ball but also then arriving at the ball and making big plays.”

Sophomore defensive end Dean Lowry said the relationship between the defensive line and the secondary is mutually beneficial. When Lowry and the other pass rushers are putting pressure on the opposing signal caller, the secondary can take advantage of errant throws. And when guys like Campbell are covering receivers for a long time during a play, the defensive line has more time to rush the quarterback.

“Having a playmaker like (Campbell) gives us an opportunity to get more sacks,” Lowry said. “It’s definitely nice having a guy like that behind us.”

Campbell credits Brian Peters, a former NU player and first-team All-Big Ten safety, for playing a critical role in his development as the quarterback of the defense.

“He was an extremely hard worker,” Campbell said. “He prepared very well for games, and he left that with me. I’ve tried to carry it on with the defensive backs that are still here.”

Campbell’s promotion to vocal leader of the defense became evident to him last year, when he noticed that he was one of the senior members of the secondary.

“Guys would come to me with questions,” Campbell said. “I realized that I had to step up and answer these questions and prepare guys for situations that I was faced with coming in as a first year guy.”

Throughout their three games this season, the Cats have posted 8 interceptions, only one less than they had all last year during the regular season. But the pass defense has also been susceptible to big play. NU has already given up 2 passing touchdowns of 50 yards or longer. Even though the Cats are undefeated so far, Campbell said there’s not a single perfect game he can remember and that improving the secondary will be a year-long process.

“We’re always trying to fix things,” Campbell said. “No matter how good of a game we play, we realize that there are always things we can fix. We are never complacent or satisfied.”