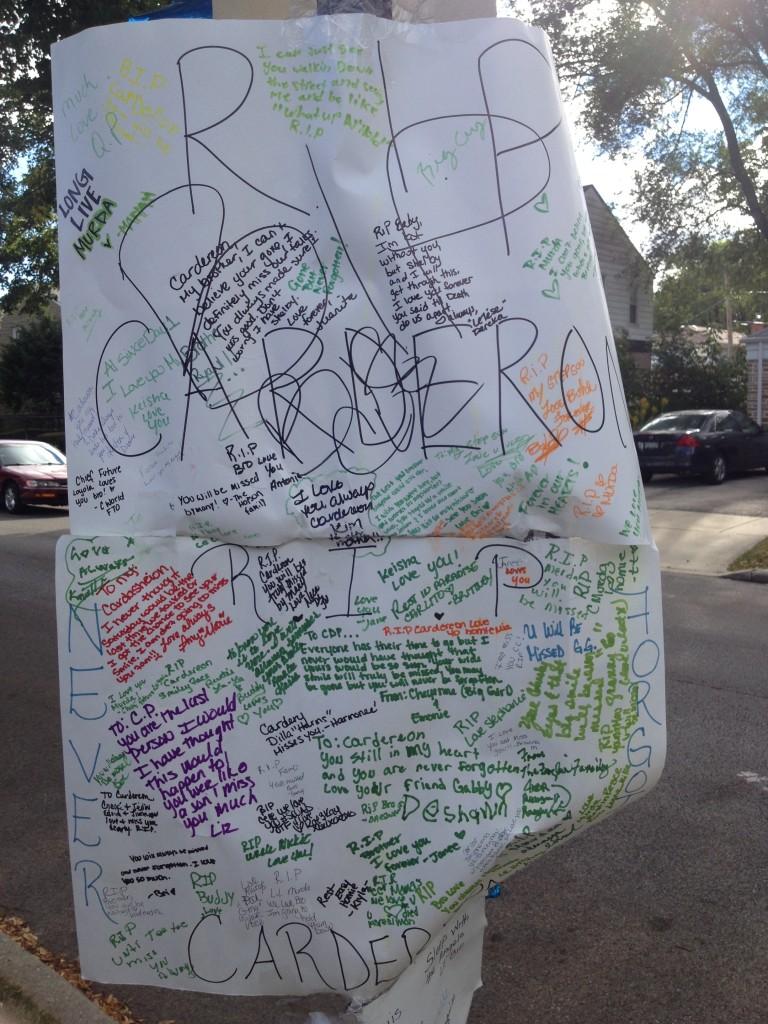 A makeshift memorial honors Cardereon Preister, 21, on Friday evening near his home in the 1700 block of Leland Avenue. He was shot to death Tuesday night.

A 21-year-old man was shot and killed Tuesday night outside his home near Evanston Township High School, according to officials.

Cardereon Preister, of the 1700 block of Leland Avenue, was shot once in the upper torso from behind about 11 p.m., police said. He was taken to Evanston Hospital and pronounced dead about a half hour later, according to the Cook County medical examiner’s office .

Police said they believe Preister was the intended target. They are trying to find witnesses and surveillance footage near the crime scene, which is about two blocks west of ETHS, 1600 Dodge Avenue.

By Friday evening, dozens of Preister’s friends and family members had left personal messages on a makeshift memorial near his home, filling two and a half posters with “R.I.P. Cardereon” already written on them.

“Everyone has their time to go but I never would have thought that yours would be so soon,” one of the notes to Preister reads. “Your wide smile will truly be missed. You may be gone but you will never be forgotten.”

A woman who identified herself as the mother of Preister’s child declined to comment Friday evening at the memorial.

Preister was on parole for burglary and drug charges, Evanston Police Cmdr. Jay Parrott said. Preister was scheduled to be released from parole in November.

Parrott said Preister had “some affiliation” with gangs in his criminal background, but it is too early to tell whether the slaying was gang-related.

Preister attended ETHS, but there is no record of him graduating, District 202 spokeswoman Evangeline Semark said.

Brown said the division recommended Preister to Curt’s Cafe, which offers GED training as part of its youth outreach efforts, but never heard whether Preister followed through. Instead, Preister enrolled in the GED program run by Family Focus, a Chicago-based nonprofit organization, but dropped out in April, according to the group’s Evanston center.

Sometime between last summer and this summer, the division helped Preister land a maintenance job at Bryn Mawr Country Club in Lincolnwood, Ill., Brown said. In a testimonial on the division’s website, Preister says the program “helped me out a lot” in finding the work.

Country club controller Richard Scarlata said Preister was hired as a seasonal employee and worked for the “grounds and greens operation” this summer. Scarlata declined to comment further.

The last time Preister reported to the division was July 28, Brown said.