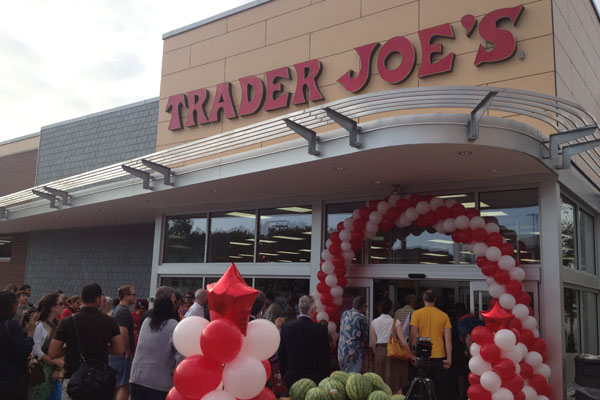 Dozens of customers stream into Trader Joe's on Friday morning. The grocery store, 1211 Chicago Ave., marked its grand opening with a lei-cutting ceremony.

Before cutting a ceremonial lei outside the new location, 1211 Chicago Ave., Mayor Elizabeth Tisdahl joked the long-awaited store has made her “famous” among some constituents.

“I did not get to be the mayor of the city of Evanston by stopping people from shopping at Trader Joe’s, so I promise a very brief speech,” she told dozens of eager shoppers, some of whom had camped out the night before for the grand opening.

The more than 70 people who gathered for the lei-cutting ceremony were offered their own Hawaiian garland as they streamed through the store’s entrance flanked by cheering employees. The store, which opened about a month earlier than expected, features several nods to the city, including hand-painted murals of the Northwestern campus and nearby Dempster Street Beach.

The festive opening came after years of formal and informal efforts to attract the Monrovia, Calif.-based chain to Evanston. A city-backed plan to bring Trader Joe’s to 1890 Maple Ave. in 2008 never came to fruition, and the grocery store passed on another site in south Evanston two years earlier.

Ald. Melissa Wynne (3rd), whose ward includes the store, said Friday morning the city is “thrilled that Trader Joe’s realizes that we are where they belong.”

NU officials were also on hand to take some credit for the school’s role in bringing Trader Joe’s to Evanston. University President Morton Schapiro said in February 2012 that the store “wouldn’t have happened” if NU had not been willing to sell or swap school-owned land north of the property.

“Really pleased to have been a part of making this thing work,” Eugene Sunshine, NU senior vice president for business and finance, told the crowd at the lei-cutting ceremony. “More pleased for our faculty, our staff and our students, who I know are going to get a lot of use out of the place and represent many customers to you all.”

After Tisdahl cut the ceremonial lei, Ogawa rushed inside Trader Joe’s and bought a bottle of olive oil. He said he will use it as a flower pot and to remember his nearly 12-hour wait for the grand opening.

Ogawa and Gitlin were not the only customers anxiously anticipating the new location. Mark Kaplan, a 55-year-old physician who lives about two blocks from the store, said he was glad Trader Joe’s finally arrived in Evanston.

“It’s a niche store, and it’s great for the neighborhood,” Kaplan said. “Everybody is happy who works here.”

Sandra Irving, a 57-year-old caregiver from Skokie, said she usually sends her son to the Trader Joe’s in Northbrook, Ill., with a grocery list.

As she pushed her shopping cart out of the Evanston store Friday morning, she added, “Now I can come here.”