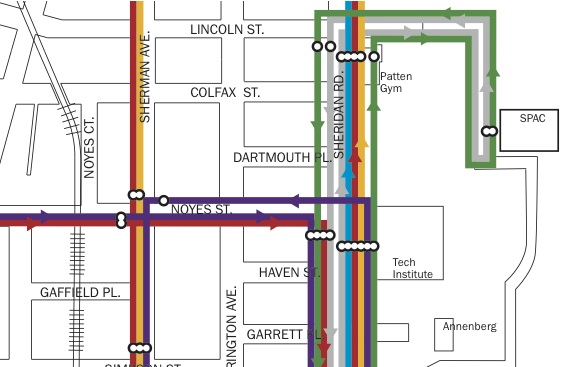 A new Evanston City Council subcommittee will consider proposed changes to the Northwestern shuttle route along Noyes Street. City and University officials have ruled out ending the service about two hours early.

A new Evanston City Council subcommittee is no longer considering shortening Northwestern shuttle service along Noyes Street, according to a city official.

The city’s Administration and Public Works Committee voted Monday night to create the panel in response to concerns first raised by Ald. Judy Fiske (1st). Fiske said about 60 residents are “directly impacted” by disruptive students waiting at the shuttle stop near the intersection of Sherman Avenue and Noyes Street.

City and University officials had been looking at ending the Evanston Loop shuttle route about two hours early — from about 1 a.m. to about 3 a.m. — to address the issue.

City manager Wally Bobkiewicz said Saturday morning that the subcommittee will not address service hours and “won’t be meeting in the near future.” The panel was originally expected to meet the second week of September.

Ald. Jane Grover (7th), who sits on the subcommittee with Fiske and Ald. Delores Holmes (5th), said Saturday afternoon that NU has agreed to move the stop from the northeast corner of the intersection of Sherman Avenue and Noyes Street to the west side of Sherman Avenue. The University is also figuring out how to make the buses quieter, Grover said.

An accelerator management system would likely reduce any noise complaints related to the shuttles, said Brian Peters, NU assistant vice president for University Services. The technology can limit the rate at which the buses speed up and thus how loud they are as they leave stops.

Associated Student Government president Ani Ajith has said ASG will stay involved in the subcommittee’s deliberations. The rising Weinberg senior plans to meet with the University about the issue this week.

“Our role in any future discussions … is to represent one of the key constituents of the shuttle service, the students themselves,” Ajith told The Daily on Saturday evening. “Any time this comes up … we’re going to be emphasizing that shuttles are a vital service for the safety of students and faculty and staff.”