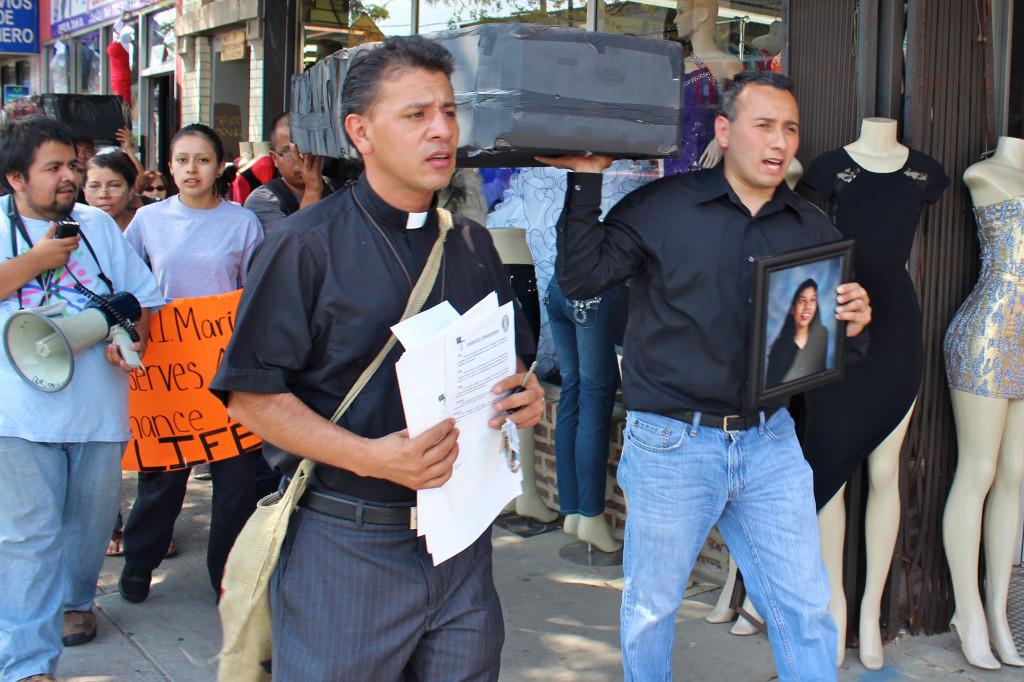 The Rev. Jose Landaverde leads about 40 protestors as they begin their march to Northwestern Memorial Hospital on Sunday afternoon. The group carried caskets to represent those who died while waiting for organ transplants.

The death of a young woman who illegally lived in the country has intensified criticism of Northwestern Memorial Hospital’s organ transplant policy, leading to a seven-mile march Sunday.

The family of Sarai Rodriguez says it holds the hospital accountable for her death Friday, saying the hospital rejected her requests for a life-saving liver transplant in March. Enraged by Rodriguez’s death, 40 protesters marched for five hours from Our Lady of Guadalupe Anglican Catholic Mission in Chicago’s Little Village neighborhood to the hospital, demanding it provide organ transplants to patients without legal residency.

Last week, about 20 activists from the same group went on a hunger strike outside Northwestern Memorial Hospital, calling on Chicago hospitals to revisit their transplant policies. The activists ended the strike after some hospitals agreed to meet with them, but they say they are still not satisfied.

Northwestern Memorial Hospital has said it follows federal regulations and does not consider residency status in its organ transplant policy. However, the hospital does take into account factors that affect the “long-term stability of a transplanted organ,” including the patient’s ability to afford and plan for years of doctor’s appointments and expensive medicine.

Carrying cardboard caskets, one with Rodriguez’s name on it, the group marched seven miles through humid temperatures and rain, chanting, “Health care is a human right, not just for the rich and white.” In Spanish, they called for transplants now.

Most protesters made the trek without stopping except for a brief water break. Supporters drove alongside in cars ready to transport tired children and some of the older marchers, but many refused to stop walking.

Several of the participants were in need of transplants themselves, such as Blanca Gomez, who has needed a new kidney for two years. She said she wants a chance at life so she can see her 2-year-old daughter grow up.

“They deny us, and they require a Social Security number or insurance,” Gomez said. “That’s not fair that they put paper over our lives.”

Others came for family members, including Maria del Carmen Garcia, whose 21-year-old son Marcos needs a transplant. She carried his picture during the march.

“I felt like the world was falling on top of my shoulders,” she said. “My son has a strong will to live. He really wants to live. He wants to survive.”

When the protesters arrived at Northwestern Memorial Hospital, Landaverde called on them to change their organ donation status until progress was made for those with illegal residency in the country. He said it was unfair that the patients could donate organs but not receive them. He said he is no longer an organ donor.

Following remarks from the Rodriguez family, the group lit candles on the makeshift caskets in memory of Sarai Rodriguez. They then marched in a circle around the coffins.

“What do we want? Transplants! When do we want them? Now!” chanted the group in Spanish, led by 18-year-old Tania Reyna.

The teen said she was tired but kept going because she wanted to support her grandmother, who needs a liver transplant. Reyna planned to stay with many of the protestors who were camping out in front of the hospital overnight.

“Northwestern has made a lot of big promises but has not written down anything on paper,” Reyna said. “We came back here to show them we’re not leaving until everything is handwritten and on papers and in place.”

Assistant summer editor Cat Zakrzewski can be reached at [email protected] Follow her on Twitter at http://www.twitter.com/Cat_Zakrzewski.