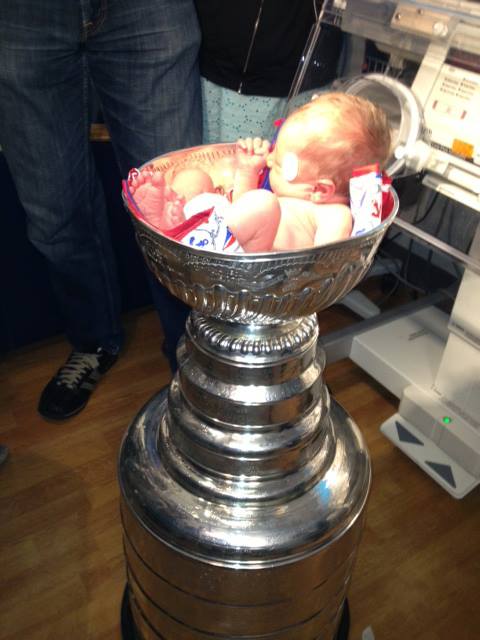 A 5-day-old baby was placed in the Stanley Cup when it visited Evanston Hospital on Tuesday afternoon. The silver trophy stopped by the pediatric wing and and special infant care unit at the hospital, 2650 Ridge Ave.

After a post-victory tour that crisscrossed Chicago, the Stanley Cup arrived Tuesday afternoon at Evanston Hospital.

Accompanied by Blackhawks owner Rocky Wirtz (Communication ’75), the silver trophy stopped by the pediatric wing and infant special care unit for about an hour, hospital spokesman Andy Buchanan said. A couple of babies — one of them only a few days old — were placed in the cup for a photo opportunity.

“People were absolutely thrilled,” Buchanan said. “It’s amazing how people light up when they see it and are attracted to it.”

One young patient who was minutes away from having his tonsils removed touched the cup and had his picture taken with it, Buchanan said. The boy’s surgeon also sneaked a peek before resuming the procedure.

The cup visit was organized by the NorthShore University HealthSystem, the Hawks’ official health care partner and the medical network that operates the hospital, 2650 Ridge Ave.