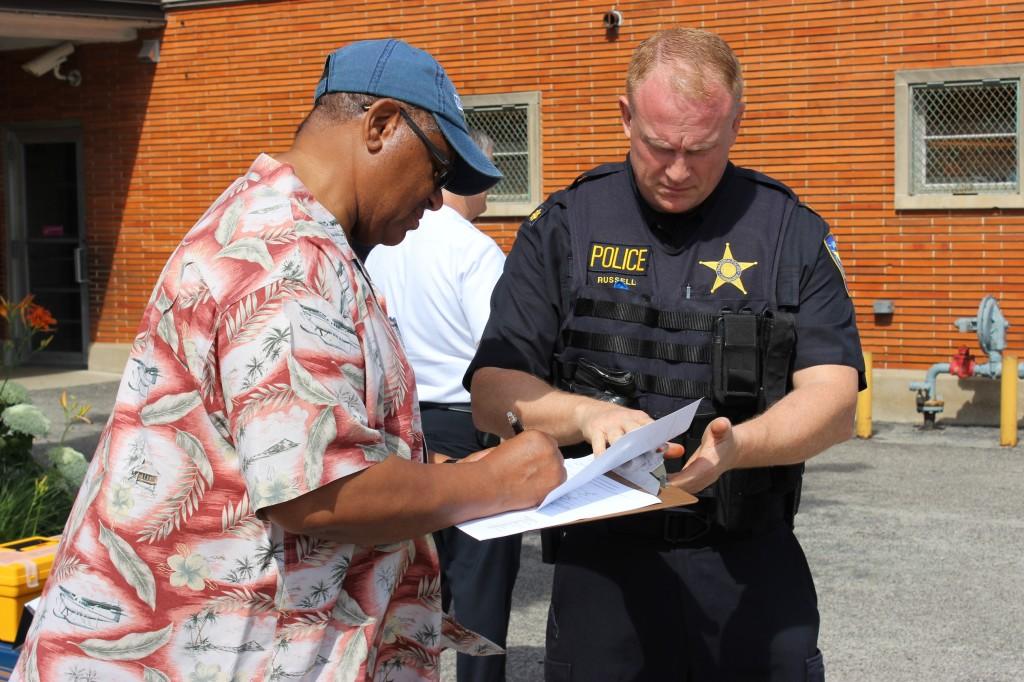 Evanston resident James Davis fills out paperwork at the city's second gun buyback event on Saturday. The three guns he traded in for $100 each brought the city's total haul to 28 firearms.

Although the city rounded up 45 guns at the buyback program’s launch a year ago, Police Chief Richard Eddington said he was encouraged enough by the most recent haul that he wants to make the option available on a daily basis.

“We want to have this service available all the time,” Eddington said.

Eddington said he does not think criminals would turn in their firearms for a $100 reward, but the event was successful for other reasons.

“For people who don’t want to maintain firearms, don’t want to care for them, don’t want to keep them under lock and key, we’ve provided a legal avenue for them to turn their firearms in,” he said. “What we’re preventing is downstream events and tragedies.”

Eddington said the service ensures the guns would not fall into the wrong hands. He said he hopes making it available daily and more publicized would contribute to less violent crime in the city.

“The option to go and get cash we thought was an incentive to move those guns people don’t want from future situations where they could become burglary proceeds or involved in a tragedy,” Eddington said.

Evanston resident James Davis brought three pistols to the gun buyback event on Saturday afternoon. Davis said he never owned guns himself, but he inherited some when his father-in-law died about 15 years ago. Since then, the firearms have been “forgotten about” in a lock box in the back of his closet, he said.

“It’s a wonderful thing,” Davis said. “We get weapons off the street and keep them from potentially falling into the wrong hands.”

(In Focus: Evanston looks to curb gun violence after 3 slain in 2012)

Murray reached out to the church, 806 Ridge Ave., to host the second event.

“I think it’s a fabulous opportunity for the citizens of Evanston to make a statement about keeping our neighborhood safe,” said Sally Clark Arden, the church’s office manager.

Assistant summer editor Cat Zakrzewski can be reached at [email protected] Follow her on Twitter at http://www.twitter.com/Cat_Zakrzewski.