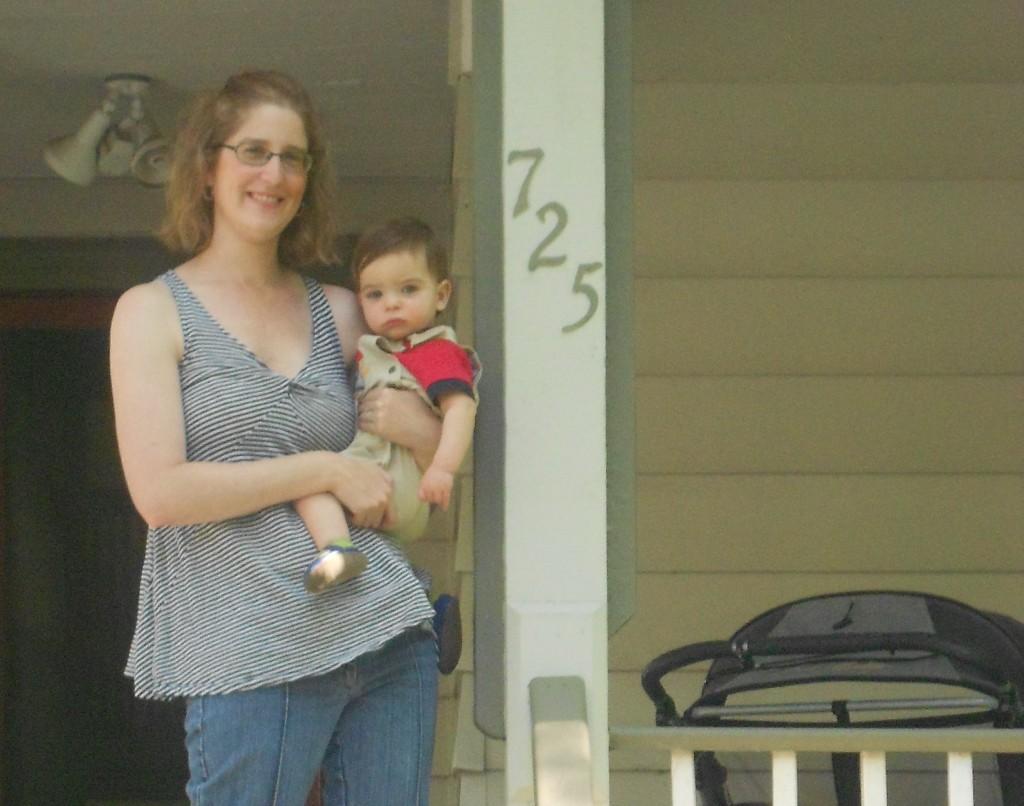 Megan Abraham holds her son Leo on the front porch of their home in the 700 block of Noyes Street, where she says two American flags have gone missing. She lives next door to Feinberg Prof. Mark Waymack, who resigned from Northwestern earlier this month, citing student misconduct in the neighborhood.

An Evanston resident for more than 40 years, John Blades has watched Northwestern students gradually make up a larger part of his neighborhood in the 2000 block of Maple Avenue.

Throughout occasional late-night parties, he and his wife have maintained a friendly relationship with student neighbors and invited them to dinner twice, once to celebrate their graduation. Still, Barbara Blades said she worries what this fall’s batch of student renters may bring.

“We feel like every year we have to start over again,” Barbara Blades said. “I think inch-by-inch it gets better, but I don’t know how students feel about it.”

Town-gown relations are once again in the spotlight after Feinberg Prof. Mark Waymack resigned earlier this month, citing student misbehavior near his home in the 2200 block of Sherman Avenue, two blocks west of NU’s Evanston campus. In a letter addressed to University President Morton Schapiro and read by Ald. Judy Fiske (1st) at a City Council meeting, Waymack partially blamed NU for not doing enough to ensure students behave themselves.

Waymack is not a lone dissident among the thousands of Evanston residents who live west of campus. Some of his neighbors say they sympathize with his situation and regret its effect on a city-University relationship Schapiro has touted as on an upswing.

“(Waymack) is an extremely thoughtful man and I know this did not come lightly,” Fiske told The Daily on Monday. “Frankly, when I read his letter I was deeply saddened.”

‘It does not say good things about students’

The mother of three children, Megan Abraham moved two years ago from Wilmette to her home one door east of Waymack’s in the 700 block of Noyes Street.

Her 6-year-old son took a liking to American flags, so she hung one in front of her porch last year. After Abraham discovered the flag was gone, she said she filed a police report. She waited until after Dillo Day to replace the missing flag, but it too went disappeared late one night, she said.

“I don’t know what it is about the American flag. … It could be at a dormitory, and it’s likely not going to be displayed in a patriotic way,” Abraham said. “Obviously a flag is a sign of respect, and it does not say good things about students (to take it).”

Waymack said an American flag was stolen from his porch on Memorial Day, which offended him because many members of his family have served in the military.

Beside the missing flags, Abraham said she has had few troubles with students and appreciates the vitality NU brings to the neighborhood. However, she has taken preventative measures, surrounding her recently seeded front lawn with caution tape.

The state of town-gown relations

From the University’s perspective, its relationship with Evanston is nowhere near the contentious state it was in when Schapiro became NU’s 16th president in 2009.

“We’ve invested long and hard in town-gown relations,” Schapiro said during the second of two annual forums during Spring Quarter.

The same year Schapiro was inaugurated, NU landed on the Princeton Review’s list of the top 10 schools with the worst town-gown relations. At the forum, Schapiro said he believes NU is now competitive for another list: the top 10 schools that get along the best with their respective towns and cities.

In his letter,Waymack cast doubt on any progress in strengthening city-University ties, saying rowdy behavior “has only increased in the last few years.”

Abraham’s neighbors also take the good with the bad, admitting they are willing to trade off a typical suburban life to live in a college town.

Evanston resident Frances Caan said her family enjoyed living a block away from campus since they moved in last September. During Dillo Day, her daughter watched students party nearby their home during the musical festival.

Neighbors let their guard down during Dillo Day because they know it is a time when students let loose, said Susan Swanson, who lives in the 2100 block of Maple Avenue.

However, Noreen Metz, who lives in the 2100 block of Sherman Avenue, said some behavior still crossed the line. She recalled hearing someone ask another person if she could pee nearby her home.

Waymack said a lack of education provided by NU on the dangers of alcohol abuse is one of many factors that have strained town-gown relations.

Compared with student safety issues, though, sporadic misbehavior is trite, Swanson said. She recalled her friend giving an intoxicated Northwestern student a ride home when no one was else was around to take care of the student.

“Better everyone take care of everyone to be safe first and after that they can complain,” she said.

McCormick Prof. John Bayldon, who lives in the 2000 block of Maple Avenue, said some of NU’s policies aimed at curbing alcohol abuse are hypocritical. For example, the alcohol-free housing policy for several fraternities and all sororities encouraged many Greek students to move their parties off campus, he said.

Barbara and John Blades said they try to help town-gown relations by keeping in touch with the city and NU. One of top challenges in the relationship are students who have a sense of entitlement when living in a residential neighborhood, John Blades said.

“Some students feel like it’s their neighborhood rather than a shared neighborhood,” Barbara Blades said.

Still, they said it is disappointing Waymack chose to leave the neighborhood over the natural tensions between students and residents.

“To me, actually, it is sad it had to come to that point when he felt could not represent the school,” Swanson said.

The full text of Waymack’s letter, as read by Fiske:

“Dear Dr. Schapiro, as a homeowner near to your institution, I surrender. As the years have gone by the noise outside my house, the daily trash accumulation in my yard and the minor but recurring property damage have all been on a steady increase. Really, who would steal an American flag from a porch on Memorial Day? Things were enormously exacerbated when without ever mentioning it to me, I might add, you placed a campus shuttle bus stop on the south side of my property. I am simply worn down. Last weekend’s Dillo Day was the straw that broke the camel’s back. At one point, I had to suggest to twelve students that they find some place to lounge other than on my front steps. The red Solo cups, beer bottles and discarded food litter were beyond appall. The noise into the night was again aggravating, and one more chunk of hedge was broken down. I realize you have taken token efforts to discourage this kind of behavior, and I believe that it represents a minority, though a significant minority of your students. But instead of diminishing my unfavorable experience, it has only increased in the last few years. And my perception is that there is a culture of tolerance or perhaps indifference on the institution’s part. Students will be students and that sort of thing, so yes, I hold you and your office in the end accountable for this kind of behavior. Not only am I worn down and aggravated as a homeowner, I am also by coincidence an adjunct faculty member in your institution. That connection is also a source of some sense of shame. Guilty by association, I guess. What to do. I have no intent of any sort of legal action. I do not have deep pockets like your institution and given NU’s general stance with community relations which might well be something that students learn from, I would have no chance of a happy outcome. And however deplorable rudeness, insensitivity and disrespect may be, a court of law hardly seems the place to address such matters of character and behavior. So I’ve decided on a twofold strategy. First I will sell my house and move. It will take a while to do the usual fixing up and such maybe a year or so, but I’m leaving. Being angry and disgusted on a regular basis is not a good way to live. Moving will save me that aggravation. Secondly, I ask that this letter serve as a submission of my resignation as an adjunct faculty member in the program in medical humanities and bioethics in the Feinberg School of Medicine. That will take care of my shame. It was not like this when I moved into my house 18 years ago nor when nearly at the same time I became an adjunct faculty member.”

Assistant summer editor Edward Cox can be reached at [email protected] Follow him on Twitter at http://www.twitter.com/EdwardCox.