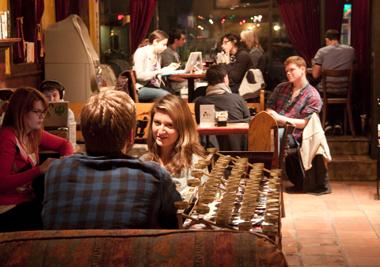 Prior to undergoing renovations, Kafein was a popular spot for Northwestern students. The vintage cafe reopened June 14.

After closing for renovations in early spring, one of Evanston’s vintage cafes reopened earlier this month.

Kafein, 1621 Chicago Ave., gained a following among Northwestern students for its late hours, open-mic night and broad menu. The coffee shop reopened June 14, months after it abruptly shut its doors.

“We are reopened, so that’s the great news,” O’Leary said. “Kafein is the same.”

It remains unclear whether Kafein under O’Leary will host open-mic nights or have the same hours. The new owner declined to comment further.

“All building code violations that needed to be addressed were corrected,” Palmer said in an email to The Daily. “Kelly O’Leary has received her license and is open for business.”

Palmer said he was pleased with the way O’Leary worked with city staff to resolve the problems.

“She was very happy and relieved when the work was done,” he said.