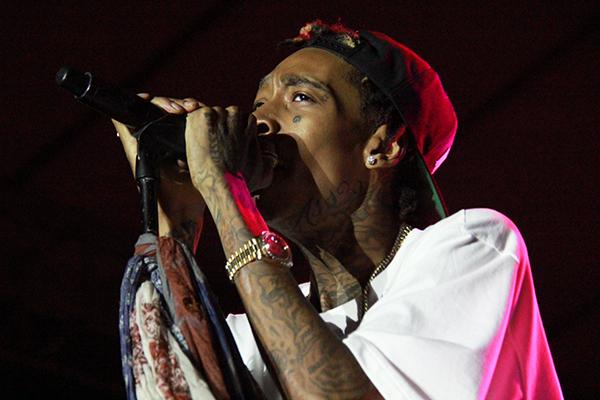 Pittsburgh-based rapper Wiz Khalifa performs Saturday night on the Lakefill as Dillo Day's headliner. He went on stage after a four-hour delay due to weather.

When Mayfest wanted sunshine, it got rain — but for the third consecutive year, Evanston’s unpredictable spring could not stop Dillo Day.

Thunderstorms forced Mayfest to evacuate the Lakefill just before 4 p.m. Saturday. The inclement weather missed rapper Danny Brown’s set by minutes but suspended the music festival until about 8:30 p.m., when attendees were allowed to return to the Lakefill to see ’90s rock band Smash Mouth and rapper Wiz Khalifa play shortened performances on the muddy field.

Burgwell Howard, assistant vice president for student engagement, sent an email titled “The Best of Dillo is Back On!” to all students about 15 minutes before the festival resumed.

Smash Mouth took the stage at about 8:45 p.m., playing for 45 minutes and closing with an extended version of “All Star” that was almost entirely led by the audience.

Khalifa was scheduled to perform for 90 minutes, but due to a city curfew, his set was cut in half. After his DJ warmed up the crowd, Khalifa took the stage with his hit “Black and Yellow” and ran through recent guest verses before returning to fan favorites off his studio albums.

Khalifa kept performing as the stage lights went out twice.

“I don’t know what’s going on with these lights, but f— it, we don’t need lights,” he said after the first outage, drawing cheers from the crowd.

About 45 minutes into the performance, Khalifa’s sound was cut during “Work Hard, Play Hard.” As the crowd began to boo, the rapper ran to the front of the stage and tore off his shirt.

The day was filled with several shout-outs to Northwestern students, whom Brown called “some smart-ass kids” during a break between songs.

Student band Juc E Frut and indie rock band Walk The Moon also performed before the rain delay. Electronic producer Lunice, who was scheduled to open for Khalifa, did not perform due to the weather.

Correction: This article originally misstated the number of arrests and citations, based on incorrect information in an email sent by an Evanston official. The article has been updated to reflect the new information.