The Daily Northwestern • May 30, 2013 • https://dailynorthwestern.com/2013/05/30/campus/students-mark-sheridan-road-with-green-ribbons-to-spread-mental-health-awareness/ 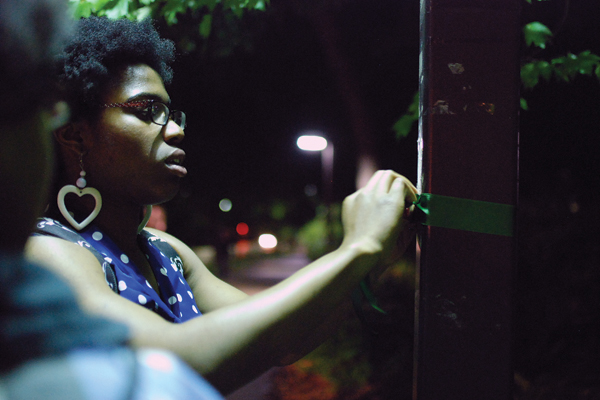 SESP junior Rebecca Abara ties a ribbon to a lamp post on Sheridan Road late Thursday night to commemorate the end of Mental Health Awareness Month. The event was forced to end early due to the rain.

About 10 students braved the rain late Thursday night to line Sheridan Road with green ribbons marking Friday as a day of observance for mental health awareness on campus.

SESP junior Rebecca Abara led fellow members of Zeta Phi Beta sorority in the last of a series of mental health-themed events titled “Free Your Mind.” Abara said the group chose green, the color of mental health awareness, to serve as a reminder to students that though Friday is the last day of Mental Health Awareness Month, the topic continues to be relevant.

“The day of observance is basically creating a symbolic representation of mental health awareness that people can see and recognize and use as a tool to get connected with mental health issues,” Abara said. “As the last day of Mental Health Awareness Month, which is the entire month of May, it’s a good way to let people know this is a serious thing. We acknowledge it, we accept it and we want to do everything we can as a campus community.”

The students began at The Arch and worked their way north, intending to tie ribbons on every lamppost on the campus side of Sheridan Road. Although inclement weather caused a break in their progress, they finished the project after the rain stopped.

Mental health has been a prominent issue on campus this academic year, fueled by the suicides of two students. Weinberg junior Alyssa Weaver committed suicide in November while studying abroad in London, and McCormick sophomore Dmitri Teplov took his own life in Pancoe Hall weeks ago.

“Knowing the things that students go through on a regular basis on our campus, on top of the fact that we’ve had so many deaths this past school year, it’s something that really need to be said that we should … make sure that we’re doing everything we can to support mental health issues,” Abara said.

“We have this representative symbol reminding people not to forget,” Abara said.

“We just wanted to spread the word and start something that can grow into something bigger,” she said.