The Daily Northwestern • May 29, 2013 • https://dailynorthwestern.com/2013/05/29/sports/lacrosse-northwestern-plays-a-solid-season-disappoints-in-tournament/ 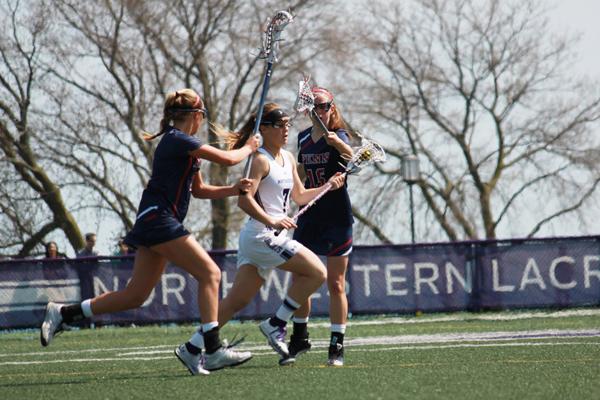 Northwestern had its shortest season since 2005 this year after failing to advance past its quarterfinal matchup against North Carolina in the NCAA Tournament.

The regular season also tested the Wildcats more than the seven-time national champions are used to. The Cats spent a good deal of the season learning how to work well with each other on the field and suffered an early loss to North Carolina, as well as a crushing 18-point defeat at the hands of Florida toward the end of the season. That game was the worst loss the team has seen since coach Kelly Amonte Hiller took over the program.

Nonetheless, NU ended its regular season 15-2 and went on to win its sixth American Lacrosse Conference title in seven years — a championship made even sweeter because NU got its revenge and defeated Florida in the final game.

The Cats received the second seed in the NCAA Tournament in May. NU’s first two games of the tournament were dominant wins over Stanford and Penn State that saw commanding performances from junior draw specialist Alyssa Leonard and senior midfielder Taylor Thornton.

Leonard and her junior classmates noticeably stepped up in the post-season and proved themselves a worthy cohort to fill the shoes of the seven seniors the team graduates this year.

Leonard won 125 draws for NU this season to set the program’s single-season record as well as career record, with 306 draws. Junior defender Kerri Harrington led the team’s defense and worked with new sophomore goalkeeper Bridget Bianco to form the Cats’ tight defense, one of the team’s most consistent elements all season.

Junior midfielders Kat DeRonda and Kelly Rich also stepped up on attack with 12 and 21 goals a piece, but this year’s offense was all about senior Erin Fitzgerald.

The senior led the team with 59 goals this season and was the most dependable goal-scorer for NU throughout the team’s campaign.

Both Fitzgerald and Thornton were named to the first-team All-American squad. Other seniors including midfielder Gabriella Flibotte, who led the team with 60 ground balls, Ali Cassera and Amanda Macaluso — who had 24 and 25 goals, respectively — rounded out the team’s greatest contributors this season.