The Daily Northwestern • May 29, 2013 • https://dailynorthwestern.com/2013/05/29/campus/asg-diversity-and-inclusion-nominee-withdraws-two-other-vacancies-filled/ 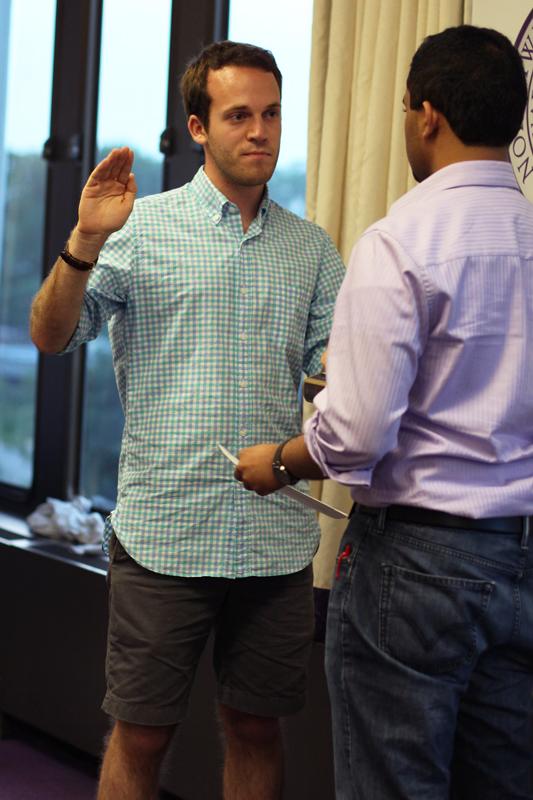 SESP junior David Harris is sworn in as chief of staff at an Associated Student Government meeting Wednesday evening. One other candidate, Julia Watson, was also confirmed for a cabinet position as the public relations vice president.

Associated Student Government’s top diversity post will remain vacant through the summer after the latest nominee withdrew early Wednesday ahead of the weekly Senate meeting.

Senate filled two other vacancies in the cabinet at the meeting.

The position of diversity and inclusion associate vice president was the subject of controversy three weeks ago when Senate rejected Medill sophomore Stephen Piotrkowski due to concerns about his qualifications and ability to connect with multicultural groups on campus.

After Piotrkowski was blocked, ASG began the search for a new nominee, up for confirmation Wednesday. An ASG committee chose Weinberg junior Aanchal Narang, but she informed top ASG officials early Wednesday that she couldn’t take on the position, citing its time commitment.

“She called me … and she was kind of distraught,” executive vice president Alex Van Atta said. “She realized she wasn’t going to be able to dedicate the amount of time she knew the position required.”

Van Atta, a McCormick junior, said Narang may have been worried about facing the same aggressive questioning Piotrkowski did, but Van Atta did not think it influenced her decision.

“I think it would be hard not to take it into consideration,” he said.

With the post empty, student life vice president Anna Kottenstette and academic vice president Sofia Sami will oversee the diversity and inclusion committee for the rest of the academic year and summer.

Sami said although she understands why someone may pass on the position, she was disappointed Narang withdrew from consideration.

“It was an unfortunate circumstance,” said Sami, a Weinberg junior. “That’s how we all felt.”

Kottenstette said although the empty position will be challenging for everyone in ASG, she and Sami will work to ensure the committee functions without a leader.

“Moving through the summer, it will be interesting,” said Kottenstette, a Communication junior. “It will be keeping in contact with people over the summer and making sure that projects are being maintained. Obviously it is not an ideal situation for anyone.”

At the same meeting where Senate rejected Piotrkowski for the diversity post, it also denied Watson for public relations vice president. Members of ASG attributed the failed confirmation to lasting tension from a close presidential election in which Weinberg junior Ani Ajith beat Harris.

Watson was Ajith’s campaign manager, and some senators thought she was chosen over Harris for the public relations position for political reasons. Another nominee, Weinberg junior Stephanie Hong, was rejected for chief of staff in what some senators also called a political move.

When Watson was renominated for public relations vice president Wednesday night, senators asked her only five questions and did not question Harris. At the first nominations meeting, debate and questioning over the two positions lasted about an hour.

Senators also confirmed SESP freshman Chris Harlow as the director of residential life, who will work under Kottenstette.