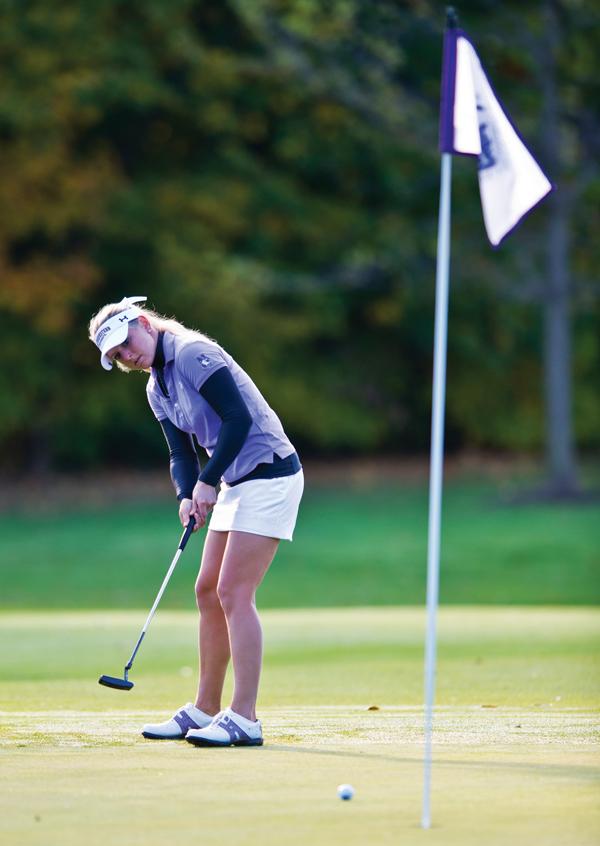 Northwestern senior Lauren Weaver was the first marquee golfing recruit to commit to Northwestern. Her success at NU helped lure more talented recruits to Evanston which subsequently set up the Wildcats run to the NCAA Championships this season.

As Lauren Weaver prepares for post-graduate life, one that she hopes next year will include medical school and later a career in dermatology, she can look back and be proud of what she helped accomplish at Northwestern.

Just five years ago, the Wildcats’ women’s golf program had almost no respect among its peers.

Pat Goss added the title of director of golf to his position as the men’s golf coach the previous fall and Emily Fletcher was just named the women’s coach. It appeared the duo faced an uphill battle to produce a formidable women’s squad.

Weaver could not have surfaced at a better time.

The 17-year-old was one of the top junior players in the country heading into the summer of 2008 and would finish her time in high school the next year as the eighth-ranked player in the nationwide AJGA Golf Rankings.

Clearly an attractive option for some of the best programs in the country, Weaver appeared unlikely to choose a school with little in the way of great golfing history.

But something she heard on her recruiting trip to NU struck her.

“I remember Pat Goss telling me that I could go to any of the programs I was looking at that were established and I would just go there and be another member on the team,” Weaver said. “But, if I came to Northwestern, I would be able to become a part of something, and that something would be building a national program, and that motivated me.”

Intrigued by the vision for the program and the academics at NU, Weaver committed to the Cats. To Fletcher, the acquisition was clearly the key component in building a winner.

“I knew getting a blue-chip player like that was really going to help set our program on the path that we wanted it to be on,” Fletcher said. “It would turn the heads of other perspective students to know that, gosh, a player like Lauren Weaver was choosing Northwestern, they really are serious about what they’re trying to do there.”

The actual play matched the hype. In her freshman year, Weaver led the team with a 75.73 scoring average and was a second-team All-Big Ten selection. Rather than a sophomore slump, the Scottsdale, Ariz., native actually experienced quite the opposite.

Weaver set a school single-season record with a scoring average of 74.49 and was named first team All-Big Ten in the process. The team also flourished, qualifying for NCAA Regionals for the second consecutive season.

Despite the clear progress of the program though, Weaver wasn’t entirely pleased.

“At that time, I was really rooting more for my individual success than my team success,” Weaver said, “I had that sour attitude toward the team where I would be down if I played poorly regardless of the team.”

Weaver said her perception changed as she matured and her coach challenged her to take on more of a team-leading role, which paid off this year.

While Weaver was in the midst of a slump, her younger teammates picked up the slack. The Cats won the Big Ten Championships for the first time in school history, advanced past NCAA Regionals for just the second time and finished a respectable 15th at NCAA Championships.

Weaver may not have produced the team’s best scores through this run, but her leadership was essential.

“Something that was critical toward us having the success that we did this year was Lauren stepping up, being able to really build into her teammates,” Fletcher said. “It’s really quite refreshing to watch her and see how much joy she gets out of seeing the team doing so well.”

The departing senior said she will miss the camaraderie she built among her teammates at NU. Weaver has to leave, but at least she will do so with the knowledge that taking the less traveled path harbored no regrets.

“When I came in as a recruit and Pat Goss said that the team would win Big Tens and make it to Nationals in my time, that was an incredibly lofty goal,” Weaver said. “But then we got two great coaches, all of these great players, and look at us now. We did win Big Tens, we did make it to Nationals and we definitely put together the best team in program history by far.”