The Daily Northwestern • May 28, 2013 • https://dailynorthwestern.com/2013/05/28/campus/artists-discuss-social-justice-community-connections/ 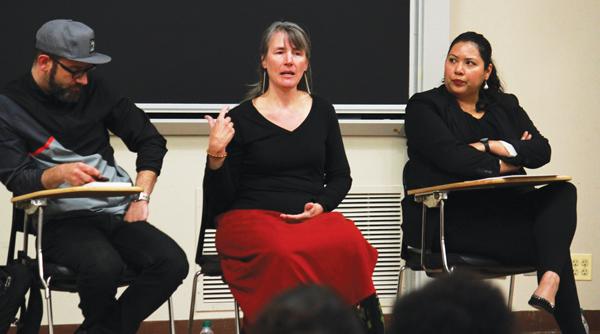 Kevin Coval, Lisa Wagner-Carollo, and Lauren Pacheco speak Tuesday evening in Fisk Hall about their work in uniting art with social justice. Coval is a poet, Wagner-Carollo is the founder of Still Point Theater Collective and Pacheco works in Chicago to diversify the arts community.

Three Chicago artists discussed how to use art for social change in a panel event Tuesday evening.

The panelists told the audience their life stories, what motivated them to join the art community and what prompted them to use art in the face of social issues. They also answered student questions about getting resources for art projects and when to listen to authorities when using public spaces for their work.

“If you divorce art from politics that means you’re trying not to have politics,” Coval said. “It’s impossible. You can’t just have things that are pretty without them having some sort of political value.”

Coval is the co-founder of Louder Than a Bomb: The Chicago Youth Poetry Festival and the author of several poetry collections. He said he turned to art after deciding a political career would be too shallow, and he instead felt inspired by individuals presenting their stories in public.

“Art is public, has an audience,” he said. “Part of what the role of public artists is, is to communicate with that audience in this ancient form of call and response.”

Pacheco also discussed the intersection of art and the public when she described her nonprofit organization, the Chicago Urban Art Society. CUAS is known for bringing “Before I Die,” an interactive art project originating in New Orleans that came to the gang-populated streets of Chicago.

“Before I Die” features public, mural-sized chalkboards on which city residents and passersby write down the things they want to do before they die. Pacheco said people from all over the city came to write on the chalkboard in Pilsen, “in a community they didn’t live in, that they weren’t from, but a community that allowed this interactive component to be embraced by everyone.”

“The work that I do … is not focused on revitalizing communities,” she said. “I love my community the way it is.”

Pacheco said she watched her younger brother and peers grow up with few opportunities on Chicago’s South Side, and she wants to bring more public, interactive pieces like “Before I Die ” to black and Latino communities in the city.

Wagner-Carollo, the founder of Still Point Theatre Collective, shared her experiences putting on theater workshops for incarcerated women in the Chicago area. She told a story of watching a powerful performance by an inmate whom Wagner-Carollo later discovered was in prison for accidentally shooting her baby while trying to commit suicide.

“She had a chance to get up there and express who she was, not just this woman with a life sentence,” she said. “We really don’t know the stories of all the people who are in prison.”

The panel was hosted by the advocacy committee of NCDC, one of the largest social justice organizations at NU. Advocacy co-chair Julia Coppelman said the group, which contributed to the recently-concluded Living Wage Campaign, wanted to host an event that emphasized “applied social justice without starting another campaign.”

“I think it was pretty good turnout given that advocacy is still re-establishing itself,” said Coppelman, a Weinberg junior. She mentioned before the panel that NCDC is working to bring a “Before I Die” installation to NU.

Weinberg freshman Connie Panton said she attended the event because she is interested in social justice and likes hearing about art projects.

“I love that they had three so different approaches to art and social justice,” she said. “Hearing the personal stories really touched me and made me really want to learn about what’s going on.”

Correction: A previous version of the caption for the photo accompanying this story misspelled the name of Kevin Coval. The Daily regrets the error.