The Daily Northwestern • May 27, 2013 • https://dailynorthwestern.com/2013/05/27/city/not-your-average-housewife-the-evanston-grandmother-who-sued-donald-trump/

Not your ‘average housewife’: The Evanston grandmother who took on Donald Trump 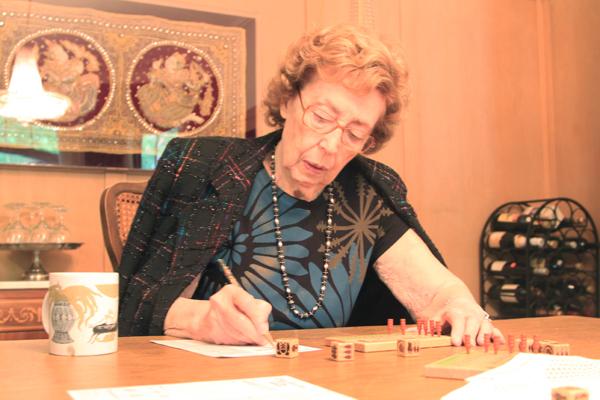 Jacqueline Goldberg, 87, studies the score pad of "Rolling Through the Ages." The Evanston resident lost a lawsuit Thursday against Donald Trump's company over canceled financial incentives for two condos at Trump International Hotel and Tower that she invested in.

Jacqueline Goldberg describes herself as an “average housewife,” but that may be an understatement.

At 87, the Evanston resident puts in four to six hours a day as a financial planner running her own company, Arthur Financial Planning Inc., 500 Davis St. She does most of her work at home so she can also take care of her husband Arthur, who has been debilitated by a stroke. She also manages the family’s investments, including two condos at Trump International Hotel and Tower in Chicago she paid down in 2006.

Over the past two weeks, Golbderg’s lawsuit against Donald Trump’s company over those condos has drawn national attention, pitting the loud-mouthed real estate mogul against the feisty grandmother.

Goldberg claimed $6 million in damages against Trump’s company for canceling financial incentives after she paid a $500,000 deposit on the two condos. The suit, filed in 2009, brought Trump to Chicago to testify this month.

The jury denied her claim to damages Thursday. A judge will rule on her claim that Trump’s company committed breach of contract in the coming weeks.

In interviews with The Daily on the phone Friday and in person Saturday, Goldberg said she does not regret taking Trump to court.

“If I didn’t win anything else, at least I exposed him — his character — so that nobody else will be caught the way I was,” Goldberg said.

Legal action against Trump was far from Goldberg’s first choice when she found out Trump Tower had retracted some perks that had attracted to her the condo deal in the first place, including allowing unit buyers to retain an ownership share in the development.

“I didn’t want to go into a suit,” she said. “They are very expensive. They are very stressful. They take a long time.”

But the octogenarian was also determined to not have Trump’s company continue managing her properties. She said she initially tried to rescind the contract, then made several offers attempting to gain back control of the condos. None succeeded.

“In the end, it came down to either accept what he’s done or sue,” Goldberg said.

Her youngest son, David Goldberg, worried when he learned about her decision.

“I was a little nervous because I know he’s a public figure,” the 52-year-old computer programmer said. “You just figured this is going to be a little bit of a circus.”

But Jacqueline Goldberg was not one to shy away from the stress and attention that come with a high-profile lawsuit, including the uncomfortable task of sharing intimate details of her personal life during testimony.

“I knew when I took this on that that would happen,” she said. “But that doesn’t stop you.”

Jacqueline Goldberg was not born with a silver spoon in her mouth. At the age of 11, she was sent to a children’s home in Chicago after her father died and her family was too poor to take care of her. She stayed at the home until she was 17.

Jacqueline Goldberg studied biology at Roosevelt University with the hope of becoming a doctor, working a variety of jobs fund herself education. That plan changed when she met her future husband, Arthur Goldberg, at the school. The couple moved to the University of Wisconsin before Jacqueline Goldberg completed her degree so Arthur Goldberg could pursue a doctorate in physical chemistry.

Jacqueline Goldberg eventually returned to Roosevelt to complete her last semester, challenging herself to earn four As and falling short by one.

Afterward, she devoted her time to raising her kids and running the house — until one day in 1967, when Arthur Goldberg passed out at work. He was later diagnosed with having a migraine variant.

The couple had life insurance, but Jacqueline Goldberg was concerned it would not be adequate, recalling her own father’s death.

Jacqueline Goldberg had already developed an interest in business listening to her husband talk about his work at their weekly nights out for dinner. So at the age of 41, Jacqueline returned to Roosevelt to pursue a master’s in accounting, starting her own company soon after becoming a certified financial planner. She named the company after her first client, her husband, who had sold his company and entrusted her with managing the money.

Her first investment in real estate came in 1995, when she bought an apartment at Chicago’s River Plaza to prepare for the couple’s retirement. The Goldbergs had hoped to spend the weekends visiting museums and playhouses, but the plan never materialized because of Arthur Goldberg’s deteriorating health.

Jacqueline Goldberg decided to rent out the property instead, buying more units as she could afford them and avoiding mortgages when possible.

“I have a particular preference not to owe money because I have in the past, and sometimes it’s very hard to pay it back,” she said.

Jacqueline Goldberg tries to impart the same lessons to her children. David Goldberg recalled being forced to save half his earnings when he worked a part-time job selling newspapers at the Chicago-Main Newsstand as a teenager.

“If you always save something, you’ll end up rich,” Jacqueline Goldberg said.

The other lesson she teaches her children: Things change, and you have to deal with them.

“You have to be prepared to lose,” Jacqueline Goldberg said, hinting at the lawsuit.

The suit has taken a toll on the family, forcing Jacqueline Goldberg to hire a part-time caretaker for her husband, among other adjustments. Her children, who all work in the Chicago area, tried to go to the trial as often as they could or take care of their father.

On Saturday afternoon, though, David Goldberg was just walking his mother through the board game “Rolling through the Ages” as the grandchildren watched TV in the living room. Occasionally, Arthur Goldberg crossed the room, and his wife stopped what she was doing to walk with him, holding his hand.

“It will be over,” Jacqueline Goldberg said, “and when it’s over, I’ll go back to my normal living.”